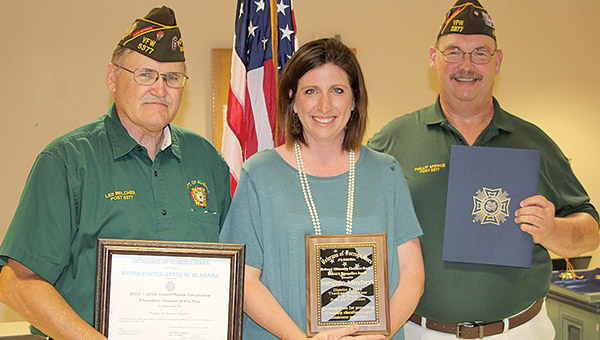 Demopolis City Schools teacher Meggin Mayben was named the Veteran’s of Foreign Wars Teacher of the Year for the State of Alabama during an awards ceremony held by VFW Post 5377. Mayben was named the post’s teacher of the year followed by the district’s award winner prior to competing at the state level with the 12 other VFW districts in Alabama. Mayben is pictured with VFW Post 5377 Commander Lee Belcher and Information Officer Phillip Spence.

The Veterans of Foreign Wars Post 5377 held a special awards ceremony recently where a number of students were recognized as well as the VFW’s State Teacher of the Year Award.
Meggin Mayben was previously recognized by the post as its Teacher of the Year before moving on to win the VFW District title. With that, Mayben became eligible for the state award with teachers from the VFW’s 12 other districts.
“This is the first time we’ve had a teacher advance past the post level. To make it to the national level is significant,” said post member Phillip Spence.
Along with the teacher award, three area students were recognized with awards, including Victoria Belcher who received an Academic Achievement Award that includes a scholarship. That award was presented to Victoria Belcher, this year’s valedictorian at Marengo Academy. The award was presented by Belcher’s father, Lee Belcher who serves as the Post 5377 commander.
Also recognized was Mary Webb of Southern Academy who won the Patriot Pen Award. The award is presented to a student in the sixth through eighth grades based on an essay. Webb not only won at the post level, but went on to place third in the district.
The Voice of Democracy Award was presented to Jada Mack of Sweet Water. Those eligible of the award must write an essay and then record it for the purpose of judging the applicant’s speaking skills.
Lee Belcher also presented a surprise award to Spence as the post’s Veteran of the Year.
“We have had a lot of success this year and (Spence) is a big reason for that,” Belcher said.
“I truly appreciate it … it was a nice thing to do,” Spence said. “It’s always nice to know the things you do are appreciated.”
The awards were presented during a meeting at Bryan W. Whitfield Memorial Hospital on Tuesday, May 10. Vowell’s Fresh Market provided a cake enjoyed by the guests. Among those attending was Demopolis Mayor Mike Grayson and Superintendent Kyle Kallhoff.