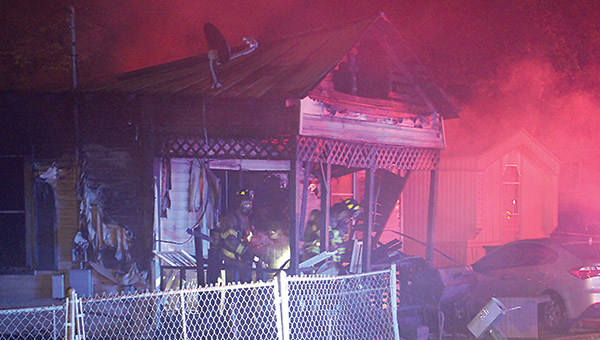 Firefighters work the scene of a house fire on First Avenue in Dempolis early Wednesday. A 19-year-old was killed in the blaze while two adults were able to escape.

Local firefighters battled a nighttime blaze Wednesday that left a Demopolis teenager dead and a home destroyed.
Kelton Perkins, who Demopolis Fire Department officials said had just recently turned 19 years old, was killed in the house fire. Two adults managed to escape the house.
DFD firefighters responded to 507 First Avenue upon receiving the initial call at 1:55 a.m. Upon arrival, the home was found to be fully involved. According to DFD Chief Vernon Waters, the fire started at the back side of the house in the kitchen.
Waters said firefighters made every attempt to enter the home to find the remaining occupant.
“We entered the building to conduct a search, but realized very quickly that it was too dangerous to stay inside. At that point we backed out to do an exterior attack on the fire,” he said.
The two adult occupants of the home told firefighters they had heard Perkins calling out earlier, but Waters said firefighters did not hear him upon their arrival.
The fire was fought back enough by 2:30 a.m. for firefighters to attempt entry into the home and search for the victim. Once found, DFD officials called in the Alabama Fire Marshal’s Office and the County Coroner.
Waters said once the fire started it spread through the house very quickly.
“It was an older home that burned very hot,” he said.
The DFD responded to the scene with a total of eight firefighters, two engines and a ladder truck. One firefighter was treated on the scene for breathing problems, but Waters said he was treated by EMTs and was able to return to the scene. Also at the scene was the Demopolis Police Department and Amstar Ambulance Service.
“(Our firefighters) did a great job and did everything the right way,” Waters said. “They all did a very professional job.”
The official cause of the fire is being investigated by the State Fire Marshal’s Office, which investigates fires involving fatalities.