Mike Grayson has announced his intentions of seeking re-election as the mayor of Demopolis.
“I am officially announcing my re-election bid. We have done good things over the past eight years and there are several projects I want to focus on and accomplish in my next term,” Grayson said.
Grayson graduated from Demopolis High School in 1970 and attended Marion Military Institute junior college on a football scholarship. He then attended Ole Miss before graduating from the University of Alabama in 1975 with a degree in Advertising and Public Relations.
Prior to being elected Mayor of Demopolis in 2008, Grayson was in the insurance business for 32 years. The majority of his career was spent with Mutual of New York (MONY). 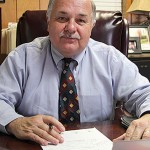 Mike Grayson announced that he will seek re-election as the mayor of Demopolis.

Grayson has served as Demopolis Rotary Club president for two terms and is a past chairman of the Demopolis Area Chamber of Commerce. During his term as chairman, he originated the Freedom on The River July 4th Festival. Another brainstorm of his is The Highway 80 Songwriter Festival. He served as “Voice of the Tigers” for 16 years as a radio broadcaster for DHS football games.
As mayor, he serves on The Alabama League of Municipalities executive board and as Vice Chair of The Community and Economic Development Committee. Mike also serves: on the board for The Black Warrior Tombigbee Waterway Association; Manufacture Alabama Government Relations Committee and The Economic Development Association of Alabama Retail committee. He is a member of the West Alabama East Mississippi Mayors Network and The West Alabama Mayor’s Association. He was elected chair of The Alabama delegation of The Delta Leadership Network of which he is a graduate. He is also a graduate of Leadership Marengo.
Grayson has been requested to speak to: The Joint Legislative Committee on Transportation meeting in Tuscaloosa and as a member of a mayoral panel before The Joint Legislative Committee on Education in Birmingham. He was also requested to represent West Alabama mayors before The Public Service Commission at the University of Alabama regarding the positive impact of The Greene County generating plant.
Grayson attends First Methodist Church of Demopolis and is a member of First Methodist Men’s Club.
He is married to Susan Crawford Grayson and has two sons, August (Jessi) and Casey (Jennifer); one grandson, Jackson; and a granddaughter, Arabella.