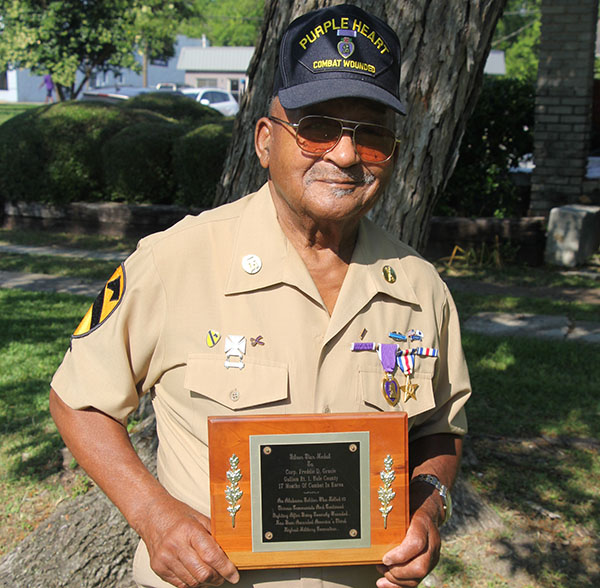 After 63 years, and at the age of 88, Freddie Gracie of Demopolis was presented the Purple Heart for his actions in Korea. Gracie served in the U.S. Army from 1950-53.

After 63 years, a local veteran has finally received the Purple Heart.
Demopolis resident Freddie Gracie, who will be 89 years old in August, recently received the Purple Heart he earned while serving in Korea. The Purple Heart is a U.S. military decoration awarded to those wounded or killed while serving their country. Gracie said U.S. Senator Richard Shelby assisted him in the process of obtaining the Purple Heart.
Gracie joined the U.S. Army at the age of 22 and served with the First Calvary Division. He served from 1950 to 1953, including 17 months in Korea.
He was wounded during combat in Korea when a mortar round explosion caused an injury to his thigh. He continued to serve in the military for two more years following his injury.
Gracie said he is proud to be honored and that others were willing to help him receive the Purple Heart after all the years that have passed.
“It took me from 1953 until last month to finally get it and I’m very proud. I want to thank Senator Shelby for his help,” Gracie said.
Gracie had been speaking with another veteran, Jerome and his wife, Jo, Farley of Vance, Alabama about the Purple Heart and it was Jerome who suggested he contact the senator’s office.
This is not the first military recognition for Gracie, he had already received the Silver Star, which is the third-highest military combat decoration that can be awarded to a member of the United States Armed Forces and is awarded for gallantry in action. According to a plague he received with the Silver Star, Gracie “killed 10 Chinese Communists and continued fighting after being severely wounded.”
Gracie did receive the Silver Star not long after his service ended in the 1950s.
Gracie at one time lived in Gallion before moving to Demopolis. He is married to Catherine Gracie and has two daughters, one also named Catherine Gracie and Freddie Onofre; and he has two sons, Alvin Gracie of Huntsville and Ernest Carter of Birmingham.