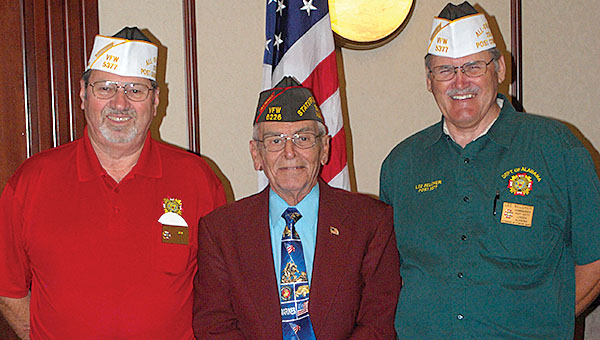 The Department of Alabama Veterans of Foreign Wars Commander Walt Dempster announced on June 4 that Marengo Memorial Veterans of Foreign Wars Post 5377 as members of the 2015-2016 All State Team.
Commander Lee Belcher and Quartermaster Luther Massey represented the post in accepting the award.
The post earned the honor by completing the requirements set by the department commander. Post Commander Belcher stated that “We completed every requirement except recommending a local Eagle Scout to be considered for a national Boy Scout award. It was one of the rare years where we did not have someone eligible for the award. I’m told that three scouts are eligible to earn the award next year. We will have a difficult task in selecting one of the three to represent the post”.
Only 12 of the 70 VFW posts in Alabama may earn All State Team status in a membership year. Many more posts completed all the requirements but only the top 12 are selected.
“This honor was earned by every member of the post,” said Post 5377 Commander Lee Belcher. “Without the support of our membership this honor would not have been possible. We also thank the community for supporting our programs with monetary and other donations. This award reflects that we use that support wisely and are determined to serve the veterans and recognize local citizens for their work in our citizenship programs. This year our local middle school Citizenship Teacher of the Year Meggin Mayben earned that award at both the district and state levels.
“I would like to recognize Post Adjutant Doug Null and Post Surgeon and Community Service Activity Chairman Phillip Spence for their support,” Belcher added.
In May Commander Belcher named Phillip Spence as the post’s Veteran of the Year for his work over the past year.