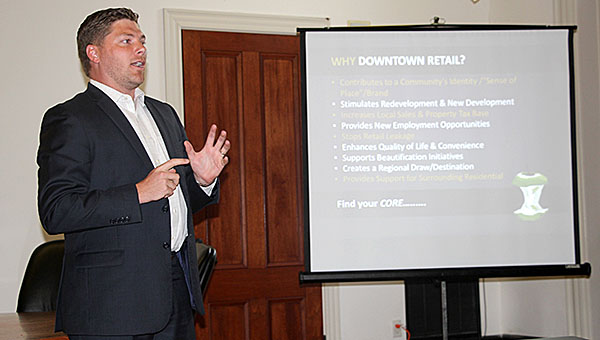 An audience of local businesses, city officials and residents gathered Thursday evening for special workshop to discuss the revitalization of Demopolis’ downtown district.
The Retail Coach was hired to assist local officials with the recruitment of new businesses to downtown about 16 months ago through a partnership with the City of Demopolis, Demopolis Area Chamber of Commerce, Demopolis Industrial Development Board and the Demopolis Business Council.
The discussion was led Scott Emison, director of retail strategy for the Retail Coach, who said his company works with over 400 communities of various sizes across the nation. He said the goal of his company within Demopolis is the recruitment of retailers and developers.
“Many cities, especially in the South, don’t realize how fortunate they are to have downtown districts. We work with many cities that are trying to recreate that look and feel. The downtown core is one of the most important pieces of economic development,” Emison said.
The keys to downtown development, according to Emison, is having proactive leaders with a vision, a coalition of informed and interested stakeholders who share the vision, and a defined plan with mission, goals and strategies. The plan could involve infrastructure improvements such as sidewalks, streetscapes and green spaces, enhancing building aesthetics and creating a gateway to downtown. Emison said one of Demopolis’s best opportunities might be in the development of Cedar Street, which he said could serve as a gateway to downtown and has several possibilities for redevelopment.
According to analysis by the Retail Coach, Demopolis has a retail trade area of about 51,000 people, which includes shoppers from an area east to Mississippi, just north of Eutaw and south of Linden.
Emison said in the 16 months that the Retail Coach has been working with Demopolis there has been interest in several areas.
“We’ve been introducing the Demopolis market and have received attention from several brands, but we need a few more pieces to come together. We’ve also seen some interest from developers. The biggest opportunity for Demopolis is in franchising,” he said.
He added that a future workshop might be held that would deal with franchising.
In terms of brands, Emison said Demopolis would likely be a good fit for regional brands from areas like Tuscaloosa and Montgomery that are already established and looking to expand.
“Our recruitment effort has to be market driven and based what is needed and what could lead to other businesses,” Emison said.
For Demopolis, the condition of properties would have to be considered. Emison said property owners might be encouraged to update buildings based on the potential for retail space. He added that funding such projects could be assisted through grants and TIF (Tax Increment Financing) Districts.
“We feel good about the potential in Demopolis,” Emison said. “It is important that we look at franchising, regional brands, and how to take some of the dilapidated buildings and turn those around one by one.”