A Demopolis police officer sustained injuries when a trespassing suspect resisted arrest and attempted to take the officer’s taser, according to a Demopolis Police Department press release.
The June 3 incident led to the arrest of Rayshawn Winn, 34, of Demopolis who was charged with second degree assault, third degree criminal trespass, resisting arrest, and disarming a law enforcement officer. 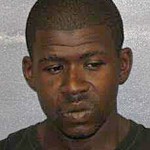 DPD officials said the officer responded to Demopolis Housing Authority property where Winn had been ordered by courts not to visit. Upon arriving on the scene and approaching Winn, a struggle ensued that included the suspect attempting to take the officer’s taser. According to officials, the officer was taken to Bryan W. Whitfield Memorial Hospital where he was treated for his injuries.
“The officer was injured during the struggle but the suspect was taken into to custody and will now face some serious felony charges,” said DPD Chief Tommie Reese.