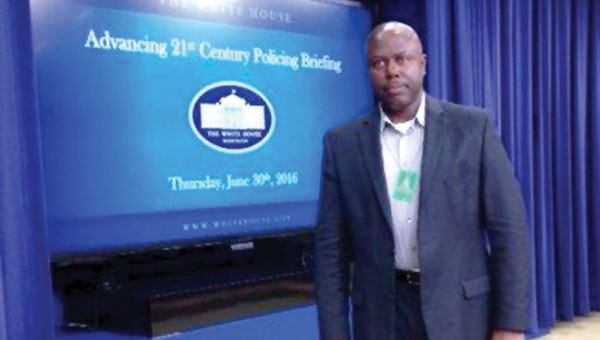 Demopolis Police Chief Tommie Reese was recently invited to the White House where he participated in a briefing about 21st Century Policing.
In December 2015, President Obama organized a Task Force on 21st Century Policing. Five months later, on May 15, the task force issued its final report.
“Most of the recommendations contained in the task force’s report are directed at the approximately 18,000 state and local law enforcement agencies spread throughout the country,” according to Ron Davis, Task Force executive director.
The recommendations are organized around six main topic areas or pillars: Building Trust and Legitimacy, Policy and Oversight, Technology and Social Media, Community Policing and Crime Reduction, Officer Training and Education, and Officer Safety and Wellness.
Chief Reese joined police executives from across the United States to hear task force recommendations for helping to keep police officers and neighborhoods safe.
“The Demopolis Police Department has made great strides in Police-Community Relations Building since Reese became the Chief of Police in 2009, by creating such program as the Citizens Police Academy, Youth Leadership Academy, Police Reserve Program and the Police Explorer Program and numerous partnerships all geared towards a community involvement,” Reese said.
Reese, who also serves as the Alabama Association of Chiefs of Police President for the State of Alabama, said he was honored to be invited to the White House and be part of the opportunity.
“Law enforcement has been under attack over the lasted couple of years just for doing the right things or for just wearing the uniform. Our officers nationwide are faced with life and death situations when they must make split-second decisions that could either save their life or someone else’s life. Law enforcement officers are also asked to wear many different hats during their shifts and be all things to everyone without offending and still be politically correct, but we have to always remember these officers have to go home safely at the end of their shifts,” Reese said.
The police chief traveled to Washington, D.C., on Wednesday, June 29, for the briefing and returned to Demopolis on Saturday, July 3.

(This story originally published in the Saturday, July 9, print edition of the Demopolis Times.)