Canebrake Players get creepy with ‘The Addams Family’ 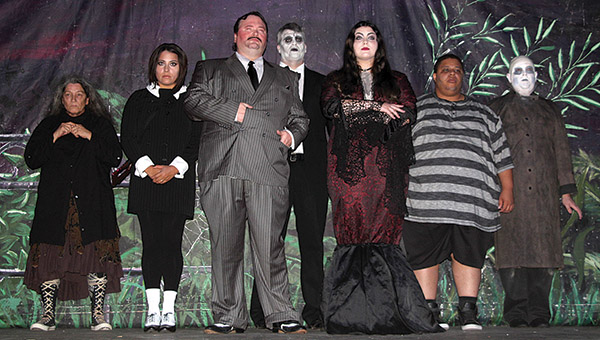 The Canebrake Players are bringing the television classic, “The Addams Family,” to its stage this weekend. The roles of the family are played by, from left, Susanna Naisbett, Brittany Anne Lowe, Dylan Daniels, Brad Daniels, Catherine Akins, Nicholas Finch,
and James Robinson.

The Canebrake Players will present four evenings of delightful macabre as the local theatre group brings the television classic, “The Addams Family” to Demopolis.
Laurie Willingham is directing the summer production that begins showing on Friday, July 29, 7 p.m., at the Canebrake Theatre. Performances will continue through the weekend with shows on Saturday, July 30, 7 p.m.; Sunday, July 31, at 2 p.m.; and the final show will be August 7 at 7 p.m. Tickets are $12 for adults and $8 for students.
“The Addams Family” features an original story and it is every father’s nightmare. Wednesday Addams, the ultimate princess of darkness, has grown up and fallen in love with a sweet, smart young man from a respectable family — a man her parents have never met. If that were not upsetting enough, Wednesday confides in her father and begs him not to tell her mother. Now, Gomez Addams must do something he’s never done before — keep a secret from his beloved wife, Morticia. Everything will change for the whole family on the fateful night they host a dinner for Wednesday’s “normal” boyfriend and his parents.
Willingham said “The Addams Family” was chosen based on its television and cultural popularity.
“Each year when we plan our season any of us may toss out ideas for plays and musicals,” she said. “I suggested “The Addams Family,” not because I had any particular love for the show, but because I thought it would be popular and well-attended by audiences. However, my feelings toward the show have changed. I don’t know if it’s this particular cast, all of whom I adore, or if it is the story. But, now I am so in love with “The Addams Family.” I think they have a message to share with the world — ‘family is everything’.”
The Canebrake Players hope the show brings back fond memories for those who grew up watching the original series.
“So many people grew up watching the television series and have probably shared it with their children. I mean, who isn’t familiar with that iconic opening song? It will bring back happy memories of a time when life was lived at a slower pace and hopefully rekindle a yearning to spend more time with family … no matter how kooky or creepy some of us are,” Willingham said.
The cast includes: Dylan Daniels as Gomez, Catherine Akins as Morticia, Brittany Anne Lowe as Wednesday, Nick Finch as Pugsley, James Robinson as Uncle Fester, Susanna Naisbett as Grandma, Brad Daniels as Lurch, Drew Martin as Lucas, Mike Baker as Mal, and Jennifer Roemen as Alice. Roles of the “Addams Family Ancestors” will be played by: Donna Bishop as Indian Maiden, Kathleen Randall as Saloon Girl, Kelley Mullins as Flapper, Paige Smith as Nurse, Brian Tripp as Gambler, Christopher Hoven as Caveman, Deborah Truelove as Courtesan, and Olivia Brooker as Bride.
The production’s music director is Deborah Truelove.
“This has truly been a team effort,” Willingham said. “Almost all the cast has pitched in with building the set, props, painting, cleaning … you name it. We are like ‘The Addams Family.’ We have become family and we’ve worked together as a team. So much goes into putting on a production. It’s hard and tedious work, but it’s a labor of love.
“I would like to send a special ‘thank you’ to Tim Soronen who started building our set, but had a health issue arise. We wish him well and we’ve missed him. We have to thank Mike Baker and Brad Daniels for stepping up and finishing the build,” Willingham said.