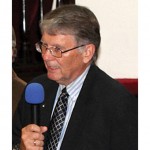 John Laney will be the new mayor of Demopolis beginning Nov. 7.

With Tuesday’s municipal election, John Laney will soon be the new mayor of Demopolis.
Laney secured a victory in the mayor’s race against four other opponents, including incumbent Mike Grayson, with a total of 1,112 votes.
The mayor-elect is a former plant manager at CEMEX, former chairman of the Demopolis Industrial Development Board, and is serving as president of the Marengo County Historical Society.
Laney will be sworn into the mayor’s office on Nov. 7, 2016.
“This was a total team effort and I want to thank those who supported by campaign. I never ran for public office and without them it would not have been as successful as it was,” Laney said. “I thank all of those who helped me in achieving the total votes we received. It is very humbling.”
Laney said his family has been his biggest supporters throughout the campaign process. He is married to Sheron Laney, and they have two grown children and six grandchildren.
“I’m very grateful to my family for everything they did as we went through this process. There was a lot of prayer and we continuously asked the Lord that, if it be His will, we be successful,” Laney said.
As for the others seeking the mayor’s office, Laney said he is proud of how all the candidates handled the campaign.
“I want to congratulate all the candidates on the campaigns they ran. It was a very clean campaign. I also want to thank Mayor Grayson for his graciousness.”
As he enters the mayor’s office, Laney said he intends to meet and get to know city staff.
“The first thing I’ll do is meet with our department heads and assure them they have nothing to worry about and to tell them my goals and expectations. I’m not a firefighter or police officer, but I will be responsible for all departments so we need to formalize some things so that we may move forward,” he said.
During his campaign, Laney’s plan focused on three areas: city management, which includes the management and needs of the city to improve overall quality of life within the city; supporting local businesses; and economic development.
“All of these things are tied together and will be working on them parallel with one another. I see the mayor’s office as a full-time job,” Laney said.
In terms of supporting businesses and recruiting new businesses, Laney said he wants the city to be supportive and active.
“We should be the strongest advocates for our existing businesses. If they have a positive attitude about Demopolis it could lead to others wanting to be here. I also want to be very active in marketing and selling Demopolis and making sure our city is in the front of people’s minds when considering a location for their business,” he said.
Laney said he feels Demopolis is at a transitional period and that he decided to run to offer a different approach.
“Our county’s population is declining. From 1990 to 2014, we have lost 12 percent of our population, including 26 percent being those ages 0-44. We are losing our children and working-aged adults. Losing those age groups means a loss of revenue and our overall standard of living will drop,” he said. “We’re also seeing a lack of capital spending to maintain the city, leading to issues with the funding and performance of other city institutions. I feel a different approach is needed to move the city forward together and that is what my campaign was all about.”
As the chairman of the DIDB in the mid-1990s, Laney said he was among those who helped form the Marengo County Economic Development Authority with the goal of recruiting businesses and industry to the area. He added it is important to take a regional approach in bringing new jobs to the area.
“We need industry to get people back to work and bring people back to Marengo County to reverse our population trends. The concept of MCEDA is for us to work together as a county. We have think regionally. It won’t be done overnight, but is a long-term vision,” he said.