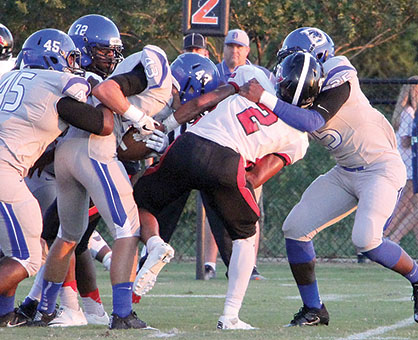 The Demopolis defense stops a Greensboro ballcarrier in his tracks as linebacker Russ Logan strips the ball away. The play was deep in Demopolis territory, ending an early drive by the Raiders.

After a tough opening-season loss, the Demopolis Tigers earned its first win of the season on its home turf Friday night against Greensboro, 42-14.
It was not always pretty for the Tigers as Greensboro threatened early in the first quarter and then began the second half with consecutive touchdowns to close the gap to 21-14, but the Tigers made the plays and benefitted from several turnovers and poor punting by the Raiders to pull away.
DHS Head Coach Stacy Luker said the victory is a big step forward for his young Tiger squad.
“I felt our intensity was way up from last week and we still have a lot of things we need to fix, but we were a much better football team this week compared to last week. That’s important because we start region play next week,” Luker said.
While the Tiger running game saw its numbers vastly improve from week one, Luker said his team is still working out the kinks on offense.
“We are trying to settle into something we are comfortable with,” he said. “We are an immature football team and we are looking to find positive things to build on. Step one was winning a football game. It’s a lot easier to find positive things after a win.”
The defense and special teams were the keys early on for the Tigers. On its first possession, the Raiders had driven down to the Tiger 7-yard line when Russ Logan stripped the ball from a Greensboro ballcarrier and returned it to the 30.
Later in the first quarter, the Tiger defense forced a punt that went straight in the air and was downed for only a 2-yard punt at the 21. From there, starting the second quarter, A.J. Jackson took three handoffs for a total of 19 yards for the first score of the game. Clay McVay’s PAT was good, giving Demopolis a 7-0 lead.
Later in the period a blocked punt that was picked up and returned by Melvin Childers to the 15 lead to a 3-yard touchdown run by quarterback Logan McVay. The PAT made the score 14-0.
McVay would score again on a 2-yard run with only 50 seconds to go in the half with a 21-0 lead.
The Raiders went to the air early in the third, leading to consecutive scores to cut the Dempolis lead to 21-14, but from there it was all Tigers.
A.J. Besteder got things going with a 39-yard TD run with 2:11 to go in the third and that was followed by an interception by Russ Logan that was returned for a touchdown.
Logan McVay capped off the scoring with a 2-yard TD run with 9:01 to go in the game.
A long injury delay that led to a player taken from the field did come late in the game and team representatives said they felt the player would be OK.
Jackson was the workhorse in the backfield for the Tigers with 87 yards on 19 carries and a touchdown. L. McVay ran for 47 yards and had three touchdowns.
Leading on defense was Russ Logan with 3 tackles, a fumble recovery and interception. L. McVay had four tackles and three assists.
The Tigers travel to Central-Tuscaloosa next week for its first region contest.