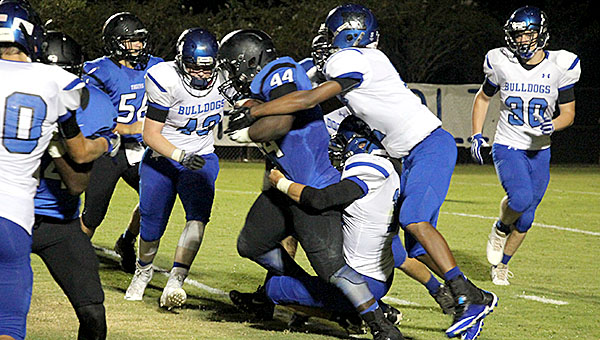 Tyler Gamble pulls forward for positive yardage against the Marbury defense. Gamble, a freshman, had one of the biggest plays of the season so far when he broke for a 99-yard touchdown run late in the first half.

The Demopolis Tigers had a big first half against region opponent Marbury Friday night on their way to a 49-7 victory.
Leading the charge for the Tigers was senior quarterback Logan McVay who threw for a touchdown, rushed for three touchdowns and returned an interception on defense for another score. He had 81 yards rushing on the night.
The night’s leading rusher was Tyler Gamble who finished the night with 154 yards, including a 99-yard run.
The defense held a shutout through most of the game until the Bulldogs, with the assistance of a few penalties, finally got on the board late in the fourth quarter.
Erin White led the charge on defense with two solo tackles and four assists. Tavian Brown had two solo tackles and three assists.
Davian Williams also had a big night on defense with a tackle, two assists and two fumble recoveries.
“We were hoping to come out fast and get a lot of our guys in the game and that’s what we were able to do. We had big plays on both sides of the ball,” DHS Head Coach Stacy Luker said.
The big lead allowed Luker to get a good look at his younger players in the second half. As for those younger players, Luker said he felt they held up pretty well against the Bulldogs.
With the mid-way point of the regular season approaching in next week’s contest, Luker feels his team is continuing to improve.
“We’re 3-1 and we’ve come a long way since the Hillcrest game. We have to continue improving because we have a big one coming next week,” he said.
That big game will be against Calera, another region foe, who comes into the game at 4-0.