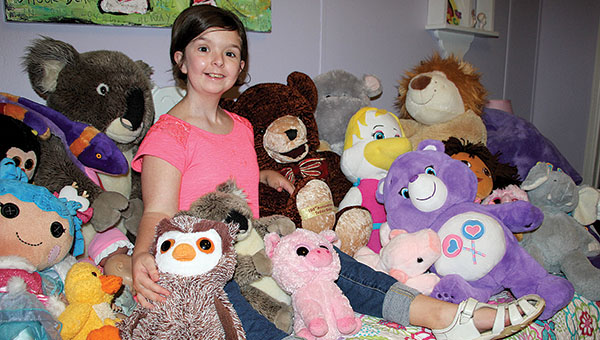 Anna-Coleman Yelverton was diagnosed with Rhabdomyosarcoma at the age of 1. She is now 14 and has been in remission for about five years. One of her greatest joys in life is her collection of stuffed animals.

(Editor’s Note: This is the first in a series focusing on local families affected by childhood cancer. September is Childhood Cancer Month.)

Anna-Coleman Yelverton’s young life has been a constant struggle, but those who meet her wouldn’t know it based on her ever-present smile and shining personality.
Anna-Coleman was born with a chromosome abnormality that led to developmental delays as well as scoliosis and leg-length discrepancy. She underwent her first surgery as a 1-year-old and at five she began wearing a back brace. The brace did not work and in 2009 she had her first back surgery for the placement of rods. Every six months she would go back so the rods could be lengthened. It was after one of those surgeries that her mother, Jennifer Thomason, said something went wrong.
“She seemed to have a sinus infection with severe head pain. It took months to find out what it was,” Thomason said.
A CT scan revealed that what Anna-Coleman was experiencing was from a tumor in her right sinus cavity. The diagnosis for the 9-year-old was Rhabdomyosarcoma, a rapid-growing malignant tumor.
The tumor quickly spread behind her eye, pressed down on the soft palate in the roof of her mouth and passed through her skull and began pressing on her brain. The right side of her nose was completely obstructed by the mass.
Very quickly Anna-Coleman began chemotherapy and radiation treatments at Children’s Hospital in Birmingham.
Anna-Coleman has now been in remission for five years, completing her treatments in 2011. While the treatments saved her life, the radiation did cause additional developmental issues. While she is 14-years-old, Thomason said Anna-Coleman has the mental capacity of about a 5-year-old. The treatments also stunted her growth.
Thomason said her daughter has been resilient in taking on all of the challenges that have faced her.
“She’s overcome a lot,” she said. “She is happy all the time and loves everybody. She loves her stuffed animals … that’s her passion.”
With hundreds of stuffed animals in her collection, she has named each one and, when asked, will tell you each one’s name.
In addition to the treatments related to her cancer, Anna-Coleman has also had three back surgeries and two knee surgeries.
“She’s always smiling and nothing holds her down,” Thomason said.
Today, Anna-Coleman is enrolled in the special needs program as an eighth grader at Demopolis Middle School.
“She loves school and her friends,” her mother said.
As for her favorite thing about school, Anna Coleman said, “I like playing with the toys and my teacher (Lisa McKeon).”
The family’s battle with cancer has led them to be active in reaching out to other families facing some of the same challenges and raising money for childhood cancer research.
“Going through the journey with cancer made me want to reach out to other families,” Thomason said. “Of all the federal money that goes to cancer research, only 4 percent goes toward childhood cancer research.”
Thomason communicates with other families in the area who have children with cancer. She has developed friendships with the families of Christian Walls, R.C. Clark, and Jacob Salens. She said she knows of at least 10 children in Demopolis who have had cancer over a span of about 20 years. She said three of those children have passed away.
“Sometimes the parents just need someone to talk to. It’s like a little ministry. We’ve met for dinner … we’re ‘The Cancer Moms.’ People can say they understand, but they really don’t. Sometimes people need those who have had the same experiences. It’s a difficult time and sometimes it can make you feel alone,” she said.
These families also communicate on a Facebook page, Cancer Moms, which Thomason established.
Thomason will soon be selling t-shirts featuring the names of the local children affected by cancer as a fundraiser for cancer research and to donate to organizations that help families. Each year, she raises money to donate to Children’s Hospital, which conducts childhood cancer research. She also donates to A-Team Ministries, which helps families with various financial needs.
“A-Team Ministries helped my family on multiple occasions and I know they have helped other local families,” Thomason said.
A family that had a son with cancer started the ministry and they saw firsthand the needs of those going through that process.
“There are times when even the smallest things are a big deal for these families,” Thomason said.
Thomason has her fundraisers each September as it has been declared Childhood Cancer Month to help bring awareness of the types of cancer that affect children and to help raise funds for research and family support.
According to the American Childhood Cancer Organization, there are 15,780 children under the age of 21 diagnosed with cancer each year and approximately 25 percent will not survive the disease.