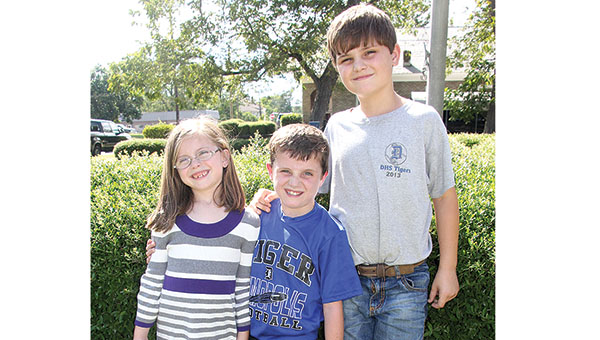 Jacob Saelens, 10, was diagnosed with Post-Transplant Lymphoproliferative Disorder after having a heart transplant in 2015. Jacob (center) is pictured above with his sister, Annaleigh, and brother Matthew. He is a fifth grader at U.S. Jones Elementary School in Demopolis.

(Editor’s Note: This is the second in a series focusing on local families affected by childhood cancer. September is Childhood Cancer Month.)

Health problems have been a constant for young Jacob Saelens, even before his birth. Those problems ultimately led to his diagnosis of cancer in 2015.
Jacob’s cancer story began while still in the womb when doctors performed in utero surgery aimed at expanding his aorta so that he would survive until his birth. That was only the beginning for Jacob.
“We knew before he was born that he would have heart problems and that he would need multiple surgeries,” said Jacob’s mother, Brady Saelens.
At only 5-days-old, Jacob would undergo his first open-heart surgery. He had a second open-heart surgery at 6-months. That surgery led to complications and his right leg had to amputated.
Again, this time at 2-years-old, Jacob underwent another open-heart surgery.
Despite all those surgeries, Jacob went into heart failure in 2014.
“At that point we had to make the decision for a heart transplant,” Brandy said.
In 2015, Jacob was at Children’s Hospital in Birmingham for four months before the family learned that a heart had become available.
That surgery went according to plan and Jacob was out of the hospital by August. For a few months, things seemed to be going well, but that all changed in December.
“He started showing enlarged tonsils. As it turned out, that was the first sign of Post-Transplant Lymphoproliferative Disorder,” Brandy said.
PTLD is one of the most common post-transplant malignancies, according to emedicine.com. It attacks the lymph nodes due to body’s immune system being depressed after an organ transplant.
At first, Jacob was taken to the hospital to have his tonsils removed and scans at that time showed no additional signs of the cancer. But, two months later, another scan showed PTLD had attacked his lungs.
Two days later, in April 2016, Jacob began chemotherapy treatments at Children’s Hospital. He continued chemotherapy throughout the summer, just recently completing the treatments.
“We are holding on chemo currently,” Brandy said. “He will go back for scans in October to see where he is at.”
Throughout the process, Jacob has done very well, according to his mother.
“He’s tolerated everything very well,” she said. “After eight years, he is like a new person following the heart transplant.”
For the family of five, the trips to and from Birmingham for treatments have been a challenge.
“It is mentally and physically exhausting. But, I love my town. Our family and community have been there to support us every step of the way. We have a great pharmacy in F&F Pharmacy who have gone above and beyond to help Jacob,” Brandy said.
With the problems Jacob has faced, Brandy and her husband Michael, are always mindful of problems.
“I’m a stay-at-home mom and I’m on call at all times. If the slightest of fever comes up, we go straight to Birmingham,” she said.
For Jacob, the best case scenario is that the October scans show a reduction in the size of cancer cells on the lungs, or possibly gone all together. “If not, we will look at stronger chemotherapy,” Brandy said.
For now, Jacob is enjoying attending school as a fifth grader at U.S. Jones Elementary and spending time with his three siblings: Harley, 15; Matthew, 9; and Annaleigh, 7.
“Everyone sees a big difference after the heart surgery,” Brandy said. “Before the transplant he was always tired and now we can make him sit down. His sisters and brother can now play with him and they have a lot of fun together.”
Currently, Jennifer Thomason, a local mother whose daughter was diagnosed with cancer, is raising funds for cancer research and to help local families with financial needs associated with treatments. To make a donation, mail to: Jennifer Thomason, PO Box 1065, Demopolis, AL 36732; or call Thomason at 334-216-5351.