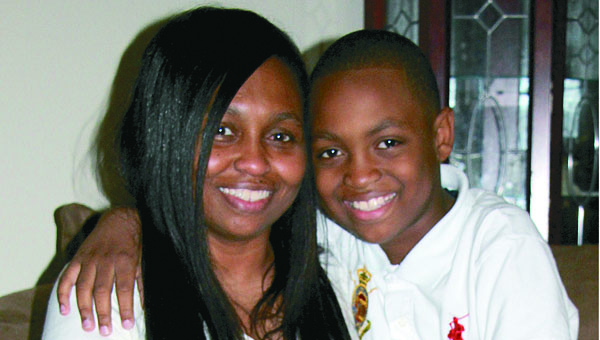 Christian Walls, now 9, with his mother Sanyvette Hill. Christian was diagnosed with a Wilms tumor in the spring of 2015 and just recently completed weekly chemotherapy treatments at Children’s Hospital in Birmingham.

(Editor’s Note: This is the fourth, and final, article in a series focusing on local families affected by childhood cancer. September is Childhood Cancer Month.)

One day after school, 8-year-old Christian Walls went to his mother saying he felt “something on his stomach.” That something turned out to be Wilms tumor, a malignant tumor of the kidney that occurs in young children.

His mother, Sanyvette Hill, felt immediately that something was wrong and took him to the doctor.

“He came to see me after school saying he felt something on his stomach,” Sanyvette said. “We looked at it and found a bulge on his right side and we took him to Fitzgerald Clinic.”

The doctors there also knew something was wrong and Dr. Alex Curtis immediately admitted him into the hospital where a CT scan was performed that very evening.

“Dr. Curtis was there at 9:30 p.m. and told said he needed to talk to me. I knew then something was very wrong,” she said.

The doctor explained to Sanyvette that the Wilms tumor had been discovered and wanted Christian to go to Children’s Hospital in Birmingham to confirm the diagnosis.

“Everything happened so fast. We were at the hospital Thursday night, at Children’s Hospital Friday when they ran tests all day long, and then on Saturday had a surgery to remove the tumor,” Sanyvette said.

The tumor was so large that the doctors could not save Christian’s kidney.

From there, the tumor was tested for cancer. At that point, the Demopolis family found that Christian had Stage 2 cancer.

“He started undergoing chemotherapy in May 2015 and had to find out if the cancer cells were in other parts of his body,” she said.

From that May through September 2016, Christian and his mother traveled to Children’s Hospital every Monday for three types of chemotherapy treatments.

“He would be so sick at home. We kept traveling back and forth. Finally, they found a medication that eased his stomach pain and headaches,” Sanyvette said.

Now that Christian is off that routine of chemotherapy, he will return to Children’s Hospital every three months for scans.

“It’s possible the Wilm’s tumor could come back.” she said. “Even as he gets older he will have to get it checked.”

But, for the time being, Christian is clear of cancer, although he will be undergoing an MRI on his spine soon, as well as physical therapy, as he is experiencing back pain.

Going through the process of healing himself, Christian did have difficulties staying up-to-date on his school work through his third-grade year. But, Sanyvette said her son worked hard alongside his teachers at U.S. Jones Elementary.

“It’s been very rough, but he’s been getting through it,” she said.

Christian, now 9 and a fourth grader, is excited to be feeling better and working his way back to the normal routine he enjoyed before cancer.

“It feels great not to be sick anymore,” he said.

He especially enjoys school where he is able to do more and more things, including his favorite PE activity, “Tiger Ball” on Fridays.

“For a long time he couldn’t much of anything; he’s able to do a lot more now,” Sanyvette said.

With September being Childhood Cancer Month, Jennifer Thomason, a local mother whose daughter was diagnosed with cancer, is raising funds for cancer research and to help local families with financial needs associated with treatments. To make a donation, mail to: Jennifer Thomason, PO Box 1065, Demopolis, AL  36732; or call Thomason at 334-216-5351.