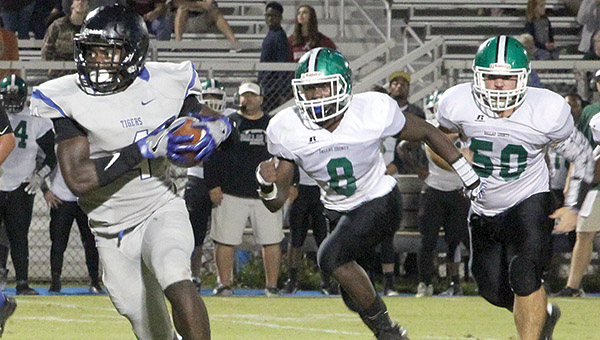 A.J. Jackson breaks free for one of several big plays on the night. This run would set up a Tiger score in the second quarter.

In spite of three turnovers, a strong running game and defense led the charge for the Demopolis Tigers as they cruised to a 35-6 victory over area opponent Dallas County Friday night.
The Tigers ended the night with 243 rushing yards. A.J. Jackson and William Wilkins both had strong nights out of the backfield. Jackson took 19 handoffs for a total of 85 yards, scoring two touchdowns, while Wilkins went for 119 yards on only 11 carries, adding a touchdown.
Quarterback Logan McVay went 4-of-8 for 70 yards, including a 28-yard touchdown pass to Tyler Jones.
One problem area for the Tigers was in turnovers, where they fumbled the ball three times, but Dallas County was unable to capitalize.
Demopolis got on the scoreboard early with its first possession, beginning the drive with a 12-yard pass from Logan McVay to Alexander Besteder to the 39. A.J. Jackson followed with a 9-yard run to the 30. Two players later McVay found Tyler Jones open for a 28-yard touchdown. Clay McVay’s point-after lifted the Tigers to a 7-0 lead.
The defense forced a three-and-out, giving the Tigers possession at the 45 after a Hornet punt.
Logan McVay, on the first play, found an opening for a big 30-yard gain all the way down to the 15. Jackson, the workhorse out of the backfield most of the night for the Tigers, followed with a 9-yard run to the 6. He would cap off the drive two plays later, making his way into the endzone from the 2-yard line. Clay McVay’s PAT gave Demopolis a 14-0 lead with 2:38 to go in the first quarter.
The second quarter began with the teams exchanging turnovers. After Dallas County intercepted a Tiger pass, DHS’s R.J. Cox followed on the very next play by recovering a fumble at the 45.
Dallas County would recover a fumble later in the quarter and would drive the ball down to the Tiger 37-yard line, but would stall there leading into the half.
The Tigers came out strong behind the running of A.J. Jackson who took most every handoff of the first drive, putting Demopolis in scoring position with a 21-yard gain to the 1 where he would finish it off plowing his way up the middle. The score lifted the Tigers to a 21-0 lead after the point-after.
But, Dallas County came right back on its first play from scrimmage with a 57-yard touchdown pass to cut the lead to 21-6. The PAT was no good.
Demopolis took possession after the kickoff at its own 31-yard line. A mixture of running plays by A.J. Besteder, Logan McVay, Williams Wilkins, and Jackson kept the drive moving forward. The big play was a screen pass from Logan McVay to Jackson for a 17 yard gain down to the Hornet 6-yard line. With a penalty backing them up, it came down to a 13-yard pass from L. McVay to Tyler Jones who was open in the endzone for the touchdown. C. McVay’s PAT gave Demopolis a 28-6 lead at the end of the third.
Demopolis would add one more score midway through the fourth when Wilkins ran the ball in for a 5-yard touchdown. C McVay’s PAT would end the scoring with Demopolis earning the 35-6 victory.
Dempolis High School celebrates homecoming next week, hosting Sumter Central.