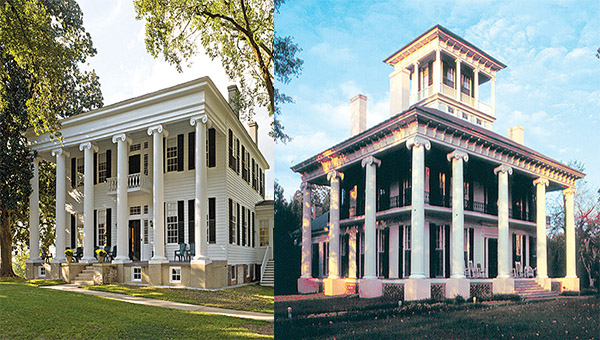 The Greene County Pilgrimmage event planned for Oct. 8 and 9 will feature the famous antebellum homes, Thornhill, right, and Kirkwood, left.

Two of Alabama’s most historic and best known antebellum homes will be featured in the upcoming Greene County Pilgrimage Saturday and Sunday, October 8th and 9th.
Thornhill, located between Forkland and Boligee, was built in 1833 by Alabama’s third Secretary of State James Innes Thornton. Its architect was famous State and University of Alabama architect William Nichols.
Thornton (1800-1877) was from a prominent Virginia family and was the first cousin of George Washington. He discovered the site for Thornhill while escorting French aristocrat and military officer Marquis de Lafayette through Alabama in 1825. The six towering fluted Ionic columned mansion overlooks the 1,800 acres of the plantation and four counties. As Ralph Hammond said in his 1951 “Mansions of Alabama,” “Had the ancient Greeks come to Alabama in search of another Acropolis, they would have found Thornhill the perfect spot to build their temples. Of all the ante-bellum homes in Alabama, Thornhill is the most handsomely situated atop a beautiful knoll overlooking thousands of acres of broad meadows and wooded forests extending in every direction”
The house has been extensively renovated by a fourth great grandson. The grounds, in addition to the “big house” include the plantation schoolhouse, which is the oldest in the state still located in its original location, the family cemetery, and a plantation bell featured in Carl Carmer’s 1930’s book “Star’s Fell on Alabama.”
The Kirkwood is a four story Greek Revival House was built between 1857 and 1860 by Foster M. Kirksey, a planter and merchant who settled in Eutaw in 1839. It is a Greek revival style house with Italianate influences. Many historians consider it to be the most impressive antebellum home in Alabama, with its eight free-standing fluted Ionic columns with egg and dart motif featured on the capitals. Kirkwood’s completion was stimmed by the onset of the War Between the States. The finishing touches of the house were not completed until the 1980s by then owners Roy and Mary Swayze. The Swayzes finished arguably the most outstanding cupola in the South, the iron grille balcony, and placed the crystal chandeliers.
When the Swayzes painted the home in 1977, it was its first coat of paint since 1912 and took 200 gallons of paint. The Swayze family spent 15 years restoring Kirkwood. Under their ownership, the house won the National Trust for Historic Preservation Honor Award in 1982 and the grand prize in the 1997 Great American Homes Awards program
The annual Eutaw Tour of Historic Homes, sponsored by the Greene County Historical Society, is scheduled for the second weekend in October. The tour is the Society’s major fundraiser, with proceeds going toward its efforts to preserve historic Greene County properties.
Tour times are Saturday, Oct. 8, from 9 a.m. until 5 p.m. and Sunday, Oct. 9, from 1 to 5 p.m. Tickets are $20 for adults, $10 for children under 12, or $15 for groups of 10 or more. Tickets may be purchased during the tour at the Green County Historical Society’s headquarters, the Vaughn-Morrow house, 310 Main Street, next to the Presbyterian Church in Eutaw. For advance ticket Information call 205-292-0015 or 205-799-7380.
Five of the homes featured on this year’s tour are listed on the National Register of Historic Places. They are Kirkwood (1860), the Elliot-Banks house (1848), the Stephen F. Hale house (1842), Thornhill (1833), and the Schoppert-Cotton house (1856). The fifth house on the tour is Fortson’s Mills (1914). Additionally, the First Presbyterian Church (1851) will be open for tour
This is the first time in many years the Hale and Elliot-Banks houses have been open for tours and Fortson’s Mills has only been open once before. The Schoppert-Cotton house was saved from demolition by the Historical Society several years ago. Since then, extensive work has been undertaken to stabilize and improve the structure. The Society’s goal is to prepare it for sale to someone who will complete the restoration of this once beautiful home.
In addition to the Tour of Homes, a multi-estate Sale will be hosted in Eutaw at 236 Wilson Avenue. The sale will include antique and contemporary items and many smalls. Eutaw Antiques, located at 105 Boligee Street, will also be open.
Baked goods, box lunches, custom made soaps and collectibles will be for sale at the Vaugh-Morrow house. Two restaurants, the Chuck Wagon, and Truman’s BBQ, are located on Eutaw’s historic courthouse square and Church’s Chicken is a short distance away on Greensboro Street.