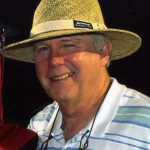 Celebration of Life service will be held Saturday, Oct. 1, 11 a.m., at Lyon’s Creek Baptist Church with Sam’s cousin, Tommy Reynolds, officiating. In lieu of flowers, memorials may be made to the Cancer Research Endowment at the University of Tennessee Medical Center, https://utmedicalcenter41273.thankyou4caring.or/pages/donation-pages/area-of-greatest-need-priorities. The family will receive friends 5-7 p.m. Friday at Bridges Funeral Home, 5430 Rutledge Pike, 865-523-4999.
Sam Braswell of Corryton passed away after bravely battling GBM, a most vicious form of brain cancer. He owned and operated a small convenient store/deli at the corner of Bruin and Dutch Valley roads which served the Inskip/Christenberry communities for over 20 years. People were drawn to his likeable personality and sense of humor. If you were a regular customer, you were likely given a nickname that became your ID. He often quietly gave aid to those in need, supported the local athletic teams and emergency agencies, and treated everyone he came in contact with as if he had known them all his life. Though he lived in the heart of VOL nation, he remained an avid Alabama football fan and good naturedly ribbed everyone about the Tide’s good fortunes. Sam was a graduate of Troy State University, and grew up in Demopolis. He met his wife of 35 years, Carlene Loveday Braswell, when they were both working for Roadway Express in Valdosta, Georgia. Sam was a kid at heart and loved his wife, children, grandchildren, nieces, nephews, friends and family in such a way that he will forever be ingrained in their hearts. We will always love and miss you Pop.
www.bridgesfuneralhome.com