A Gallion man has been arrested and charged with multiple crimes as the result of a search warrant executed on Tuesday, Oct. 4.
Russell Scott Pope, 28, was charged with second degree possession of marijuana, possession of drug paraphernalia, third degree receiving stolen property, and one count of certain persons forbidden to possess firearms. 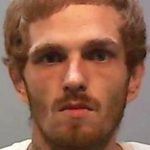 According to a press release issued by the Demopolis Police Department, police officers along with members of the 17th Judicial Drug Task Force and Alcohol-Tobacco-Firearms, executed a “no-knock” search warrant at 1484 County Road 1 in search of drugs, stolen guns and other property.
Upon making entry into the residence, DPD SWAT Team members were met by an aggressive pitbull that attacked and bit one SWAT member on the hand. The dog was shot in the process by one of the other SWAT team members. The police officer who was attacked by the dog was treated and released from Bryan Whitfield Hospital with a minor injury.
During the search, officers found a stolen handgun, marijuana and drug paraphernalia, according to the press release.
Officials said Pope was processed at the Demopolis Police Department and transported to the Marengo County Detention Center where he awaited a bond hearing.