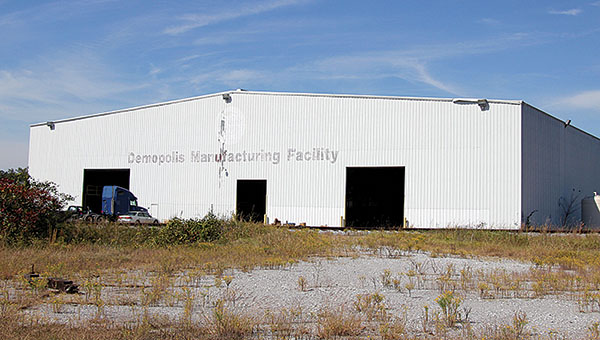 This facility in an industrial park west of Demopolis will be the site of the future Two Rivers Lumber mill, bringing a potential for 100 news jobs to the area.

Word has spread following last week’s vote by the city council to lease industrial property for a new saw mill that will be bringing new jobs to Demopolis and on Wednesday local officials involved in the deal offered additional details, including a new development pertaining to a grant for improving an access road to that property.
Mayor Mike Grayson and Demopolis Industrial Development Board Chair Woody Collins were both on hand to speak about the Two Rivers Lumber project that is anticipated to bring up to 60 new jobs to the area with up to 100 to be hired once the plant is operating and begins a second shift.
Roy Geiger of Sumter Timber and Jay McElroy of McElroy Trucking in Cuba are leading the Two Rivers project. Two Rivers will be a pine saw mill, according to Grayson, focusing on those pines that have grown too large for chip mills.
“In the production of paper, they use about 30 percent pine. There has been a lot of pine trees planted and some of those have gotten very large and are no longer suitable for pulp,” Grayson said.
The leadership of Two Rivers will be making a capital investment of about $70 million with construction set to begin in January with an anticipated opening of September 2017. It was announced at last week’s city council meeting that the average pay would be about $22 per hour.
According to both Grayson and Collins, the project has been in the works for at least six months and local officials were competing against several other sites. Collins said access to a city-owned property with a 100,000 square feet building was among the key factors in landing the mill.
“The city council spent $4 million in 2011 to purchase the building and that gave us a competitive advantage,” Collins said. “Had the council not purchased that building, this probably never would have happened.”
Collins added that the new mill offers additional economic opportunities for loggers, truckers and landowners. An economic impact report conducted by Alabama Power indicates the project would have an initial impact of about $23 million, according to Collins. In addition, he said a report by the Alabama Department of Commerce projects the selling of timber could be worth up to $32 million for landowners.
Officials also anticipate an increase in revenues during the construction phase when workers would likely be staying in the city.
The new mill could also spawn additional interest in the Demopolis port area. Two Rivers will be producing about 250,000 tons of chips. Collins said Two Rivers has an outlet for those chips, but that pursuing other options could lead to more development in the future.
“Because of this, the port is not dead. There is interest in the port,” Collins said.
The state will also be investing in the project, as Grayson and Collins were inform by the Alabama Department of Transportation that a $400,000 grant would be provided to widen the access road allowing for increased truck traffic to — not just the site of the new saw mill — but also to the West Rock chip mill. The grant will cover the entire cost of improving that road. The city will have to pay for engineering costs involved in the road project.
“WestRock already has an average of 165 trucks per day. If you take that and double it (for the new saw mill), it is not just a time issue, but also a safety concern. Trucks would be backed up onto Hwy. 80,” Grayson said.
Two Rivers will be receiving non-education tax abatements and other incentives from the city, county and state. The City of Demopolis lease with the mill is for $1,000 per month for the first five years, increasing to $10,000 per month in the sixth year. The mayor has said the lease is for 40 years with Two Rivers having the option to purchase after 20 years.
“We did give them a sweetheart deal because we want them to be profitable and to have them here for a long time,” Grayson said.
Grayson added that having local business people involved is a plus for Demopolis.
“These are local business people so the profits will stay here. It’s not like contracting with a firm in California or Germany,” he said.
Both men are pleased with the work done to bring Two Rivers to Demopolis.
“Across the U.S., manufacturing is leaving, but we are building one. We can say we built this during our lifetime,” he said. “Everything has fallen into place so wonderfully. We overcame every bump in the road.”
Grayson, who was unsuccessful in his bid for re-election and will leave office in November, said he is proud to have worked with others on the Two Rivers project.
“This is going to be a state-of-the-art facility. We may even see an influx of new families moving to our city … it’s hard to imagine the full impact. There are so many positives.
“I’m excited about this for our city,” Grayson said. “I may not be in office, but I still want to help move our town forward.”