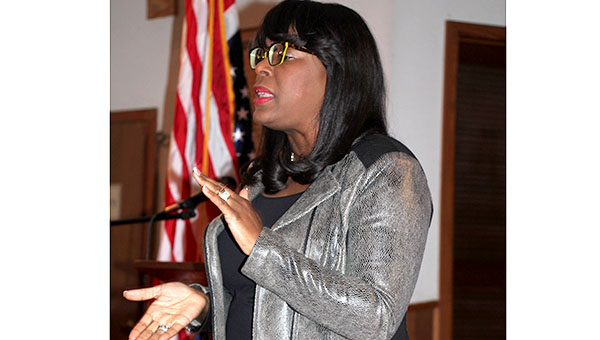 U.S. Representative Terri Sewell visited Marengo County Tuesday for a “Congress in Your Community” town hall meeting at the Little Zion Missionary Baptist Church in Faunsdale.
The Congresswoman from Selma spoke on a number of topics before the audience that gathered at the church, including grants applications, voter access, healthcare needs for rural areas, the federal budget, education, and cyber security.
The town hall is part of Sewell’s annual visits to each of the 14 counties in her district.
The first topic she spoke on was the availability of federal grant dollars and the need for each community to understand what is available.
“It’s very important to get our fair share (of grants) in rural communities,” she said.
She also encouraged those writing grants to submit them to her office so that she can review it and possibly provide a letter of support to go with the application. She also advised leaders to receive her online “Guide to Grants” newsletter that informs on the grants that are becoming available.
Sewell would tie in grants on another of her topics — infrastructure needs in rural communities.
“We see a lack of resources in many of our rural area: bridges, roads and other infrastructure needs. These are things that could breed economic development and a better quality of life for those who live there. All of our communities have infrastructure needs,” she said.
She said most grants for infrastructure needs require a 20 percent match and that many rural communities simply don’t have that kind cash in their budgets and that sometimes local politics can get in the way of progress.
“A lot of our counties and cities don’t have good credit and the needs greatly exceed the revenue they are generating.
“We have to put our best foot forward to obtain these resources … fighting over who will sit on a board will not work. We have to be willing to put in the work and it takes more than one person asking,” she said.
She also spoke on the needs of healthcare in rural communities as more services become less available.
“We’ve lost obstetrics care at a lot of our rural hospitals meaning people have to go to Tuscaloosa or Birmingham. I am working with others in similar districts with rural communities to do a study on the effects of what impact this has on our communities,” Sewell said.
She added that it is important to ensure veterans are receiving the healthcare they need.
“It is critical that we provide healthcare for our veterans. It is incumbent upon us to give them the benefits they earned and the quality of that healthcare should be superb,” she said.
On a national level, Sewell voiced frustration that no budget has been passed “because people have been running for president for the past 18 months.”
In the meantime, she said needs are going unaddressed.
“We have certain needs that must be addressed. Public health is necessary spending. We have children drinking lead-based water in Flint, Michigan; there’s the Zika virus in Florida … these are issues that the government must address,” she said.
Sewell also said the education system in America is working for some people, but not everyone and that the federal government must invest more in workforce development and training.
“Everyone needs a skill-set so they can have certain opportunities,” she said.
She also said the federal government must do more to limit predatory lending practices.
As a member of the House Permanent Select Committee on Intelligence, Sewell said it should be a priority to protect the nation from cyber attacks, stating that both the Democrat and Republican parties have been hacked during the latest election cycle.
“This is unacceptable,” she said. “I’m a proponent to spend the money for cyber security to protect, not just the election process, but our own personal information. We have to prevent future terrorism from invading our system and possibly bring down Wall Street or our power grid with a single click.”
She said a current bill she sponsored would allow larger institutions, such as banks, to share what they learn about protecting themselves and consumers from cyber attacks with smaller businesses.
Another big topic for Sewell was access to the polls. She said while many feel requiring a photo ID to vote is not too intrusive, there are many in her district that are negatively affected by the law and she used her own personal experience to illustrate the point.
“My father has been confined to a wheelchair. He hasn’t driven in 13 years (so he doesn’t have a driver’s license). Here is a highly motivated man wanting to vote, because his daughter is running for office. So, we took him to the courthouse. We had to get him up the steps into the courthouse and then find the Board of Registrars office is upstairs and the elevator was not working. It took us five and a half hours to get my father a voter ID. Again, this is a man who was highly motivated and had help. A lot of seniors don’t have that kind of help.
“No matter the party, everyone should be working to encourage voting,” Sewell said.
Among those in attendance at the event were Marengo County Commissioner Fred Armstead and Demopolis Mayor-Elect John Laney. Faunsdale Mayor George Kelley welcomed Sewell and the audience to the town and Little Zion Missionary Baptist Pastor Larry Jackson provided the invocation and benediction.