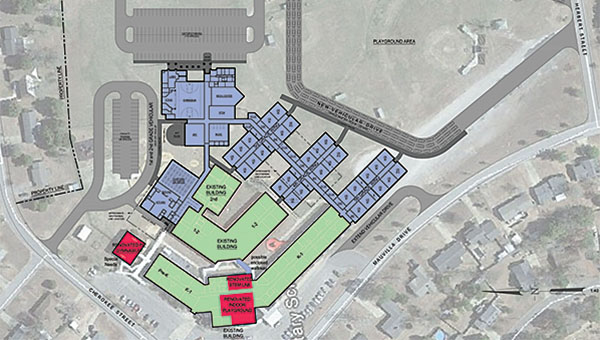 During a Demopolis BOE meeting on Monday, a plan to expand Westside Elementary was approved. Once the expansion is completed, it will house grades K-5 allowing U.S. Jones to become a career tech center.

During the regular business meeting of the Demopolis City Schools System on Oct. 17, the board approved the system’s 2016-17 Capital Plan which could lead to major restructuring of the system.
The plan itself was broken into four priorities.
The first of those priorities will cost approximately $18.4 million and will involve merging Westside Elementary School and U.S. Jones Elementary School. Construction for the project could begin as soon as the 2017-18 school year.
The plan calls for Westside to be a Pre-K through fifth grade campus with a student capacity of 1,300.
Changes to Westside include building three new 10-classroom wings, a new administrative and elective building for a media center, art room and patio, music room, second AMSTI/STEM lab and offices, a new
cafeteria and new multipurpose building with stage; updating the original building; converting the old cafeteria into extended day center and indoor playground; converting old gym to 2 severe special needs classrooms with common physical and occupational therapy areas; converting old library to AMSTI/STEM lab; flipping the campus to face Maria Avenue and including carpool lanes, parking, and bus/van pick-up areas to stack traffic on campus
Also in the first priority, changes at U.S. Jones include converting to the building to a career technical center; including Industrial Maintenance Program, Welding Program and Allied Health Program; creating HVAC Program, Education and Training Program, Virtual School Resource Center and Alternative School setting; purchasing school bus to transport students from Westside to the Ratliff Center Daily and Demopolis High School to the Career Center daily and have room to expand to meet workforce needs of the Demopolis area.
Priority two will take place during the 2018-19 school year, will cost around $3.94 million and concern upgrades to Demopolis Middle School and DHS.
Improvements to DMS include creation of dining addition to current cafeteria; building parking lot and carpool lanes on east side of campus and renovation of Interior of existing building floors, walls, doors, cabinetry, and paint.
For DHS, the goal will be to create a four lane entrance, two lanes from U.S. Highway 80 to field house and two lanes from the tennis courts to U.S. Highway 80 and updates to all restrooms, hallway floors and carpeted areas.
The third priority presented would also take place during the 2018-19 school at DMS and DHS and cost just below $3.33 million.
For DMS, improvements include building a new wing for STEM/robotics, art, broadcasting, severe special needs, and two classrooms; updating entrance and office space; removing cut through and replacing it with common area/courtyard and other exterior enhancements.
The priority three update for DHS is to build a multipurpose activity/physical education gym on southwest of campus west of the auditorium.
The fourth priority will be done in the 2020-21 school year and will again focus on DMS and DHS and would cost $4.6 million. The goal at DMS is to build 14,000-square feet gym on the current baseball field. At DHS, the plan calls for building a 20,000-square feet multipurpose indoor practice facility; turf for the football field and a parking lot on southeast corner of campus.
Superintendent Kyle Kallhoff intends to meet with the Demopolis City Council to discuss this plan and ways that the city can help in reaching the goals the system has put in place.