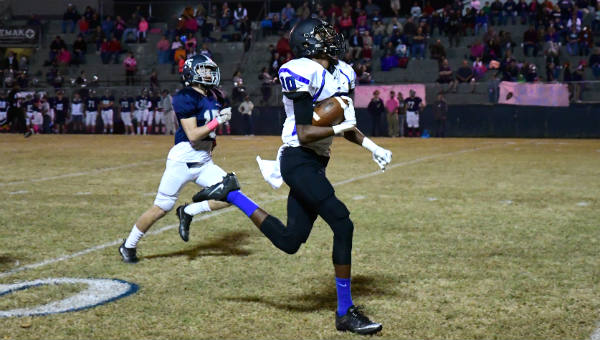 Shakari Williams breaks free for a touchdown reception against Jemison.

The Demopolis Tigers scored two touchdowns in the opening 30 seconds against Jemison on the way to a 56-7 win. The first play of the game was a touchdown, followed by the kickoff, which was fumbled by Jemison, allowing the Tigers to run it in for a second touchdown.

The Panthers seemed cursed with slippery hands as they dropped another ball on the following drive. The Tigers took possession in Jemison territory and scored soon thereafter, leaving the score at 21-0 with 5:51 in the first quarter.

Demopolis reached 28 points and remained with a comfortable lead, until Jemison put together their best drive of the night.

After the half, the Tigers showed no signs of letting up. Jemison maintained possession of the ball for the first four minutes of the half, then Demopolis took possession for a five minute drive which ended with a 31-yard touchdown run.

On the Panthers’ next possession, the Demopolis defense intercepted a pass and ran it in for a 45-yard touchdown. This was the second time on the night that the Tigers scored twice within thirty seconds.

The Tigers finished the night with 323 rushing yards on 35 carries. The passing game saw two receptions on nine attempts for 72 yards.

Leaders for the Tigers was Tyler Gamble with four runs for 81 yards and two touchdowns and A.J. Besteder ran for 65 yards on seven carries and also had two touchdowns.Shakari Williams had two receptions for 72 yards and a touchdown.

Jemison was held to 212 total yards.

Demopolis is 7-2 overall and 6-0 in their region after Friday’s matchup, and will take on Auburn High School at home next week.