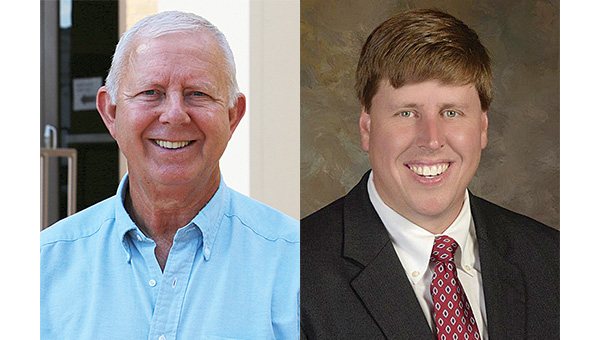 Voters in Marengo County’s District 2, which includes much of Demopolis, will be voting for county commissioner between incumbent Dan England, left, and Jason Windham.

Voters in Marengo County, and all across the nation, will head to the polls Tuesday, Nov. 8 to vote for the next president of the United States as well as key local and state offices.
Polls across Marengo County will be open Tuesday from 7 a.m. to 7 p.m. Voters will need to present a valid photo identification that could include a driver’s license, a non-driver ID, an Alabama Photo Voter ID, a passport, military Id, among others.
The general election ballot will include all candidates for president, including Hillary Clinton (D), Donald Trump (R), Gary Johnson (I), and Jill Stein (I). Johnson is a member of the Libertarian Party while Stein is with the Green Party.
While many will anticipate the nation’s selection for president, there are several key races for Marengo County seats, including two on the county commission. In District 2, incumbent Dan England (R) is being challenged by Jason Windham (D). In District 4, incumbent Calvin Martin (D) is being challenged by Emanuel Gary Jr. (R). The commission seats run by districts and will not appear on all county ballots.
On the state level, voters will decide between incumbent Richard Shelby (R) and Ron Crumpton (D) for U.S. Senator.
Other races will appear on the ballot without a challenger, including Terri Sewell (D) for U.S. Representative, Michael Bolin (R) for Supreme Court Place 1, Kelli Wise (R) for Supreme Court Place 2, and Tom Parker (R) for Supreme Court Place 3.
There are also 14 state Constitutional Amendments where voters will vote “yes” in favor or “no” to turn down. Voters may review these amendments at alabamavotes.gov./statewideballotmeasures.
According to the Alabama Secretary of State Office, there are 3.33 million registered voters for the election, an all-time high.
In general elections, voters may choose between candidates for each office, regardless of party, allowing for split-ticket voting.
“Voters who wish to cast a straight party vote for all of the candidates on the ballot in either the Republican or Democratic Party may do so by filling in the bubble next to their party preference. However, in the event that a voter wishes to vote for any candidate outside the party that they have chosen, they may do so by marking the space next to that candidate’s name,” according to the Alabama Secretary of State Office.
Voters are also allowed for “write-in” candidates. When a candidate is not listed, a voter may vote for that person by writing the name in the blank “write-in” box on the ballot. Each contest on the ballot has a “write-in” box. The circle next to the write-in must be shaded to ensure the vote is tabulated properly. In the event a voter selects the straight-party option they may still write-in a candidate for any race they choose, which will override the straight-party vote for that specific race only. All votes for write-in candidates will be counted in the event that the candidate is qualified to hold the office and not a fictional character.
There are two poll places changes in Marengo County, one in Demopolis and the other in Myrtlewood.
Due to safety issues and concerns regarding voting at a school site and within such close proximity to children, the Westside and Demopolis High School polls will be relocated to Church Aflame, located on Oasis Lane off of Highway 80 (behind Sonic).
The County Commission approved the move after considering concerns voiced by the local school board, parents, teachers, superintendent, attorney for the school board and the probate judge.
In Myrtlewood, Mayor Jane Vick asked for a change as the traditional polling place, Myrtlewood Community Center, is being remodeled and is temporarily unavailable. The Myrtlewood voting location will be temporarily relocated to the Myrtlewood United Methodist Church located at 509 E. Cedar St. (Hwy. 114).
Polling places within Marengo County include: Demopolis Civic Center, Demopolis National Guard Armory, Church Aflame, Providence Town Hall, Faunsdale Town Hall, Linden Armory, Rangeline (Baptist Church), Thomaston Town Hall/Fire Station, Taylor Community Center (McKinley), Flatwoods Community Center, Magnolia Community Center, Surginer Fire Department, Dixon Mills Fire Department, Jefferson Community Center, Hwy. 43 Voting Booth, Sweet Water Town Hall, Nicholsville Baptist Church, Putnam Store, Nanafalia Old School Building, Aimwell Baptist Church, and the Myrtlewood Methodist Church (temporary location).