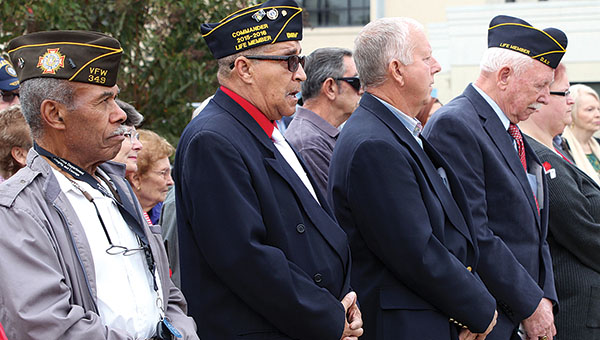 A group gathered Friday at the American Flag in front of Bryan W. Whitfield Memorial Hospital for a special program honoring veterans.
The Veterans Day program included the representatives of local veterans organizations as well as a special flag replacement ceremony involving the Demopolis Coast Guard Cutter Wedge and members of Boy Scout Troop 41. A new U.S. Flag was raised while the old flag was given to the Scout Troop for proper disposal. The Demopolis Police Department served as the color guard and presented the new flag. Jill Tutt sang “The Star Spangled Banner.”
BWWMH CEO Arthur Evans welcomed those in attendance and Dan Wilson served as master of ceremony. Marengo County Disabled American Veterans Chapter 31 Chaplain Billy Drake provided the opening and closing prayer.
Guest speaker for the event was Marengo County Commissioner and U.S. Army Reserve Veteran Dan England.
“I want to take this time to thank everyone who has served. God has been with each of you. To those who have fallen, they are my heroes and they should be everyone’s heroes,” England said.
Also speaking at the event was Lee Belcher, commander of VFW Post 5377; Walter Staples Sr., commander of the DAV Chapter 31; Tom Boggs, commander of American Legion Post 41; and Georgia Dukes, president of the VFW Post Auxiliary.
This marked the third consecutive year for the flag raising and Veterans Day ceremony at the hospital.
“The audience has gotten bigger each year. It looks to be an annual tradition moving forward adn we are proud of that,” Arthur Evans said.