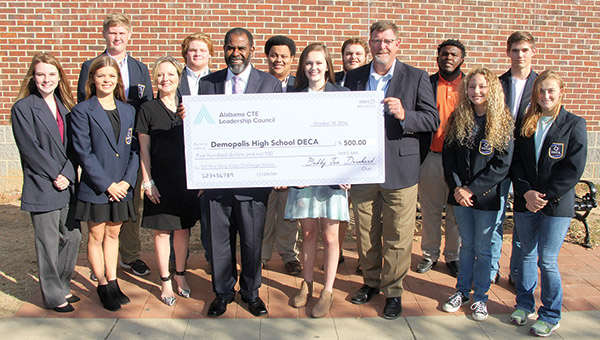 Members of the Demopolis High School DECA Club were presented a $500 grand prize for a video contest titled “Tell Your Story.” Pictured along with members of the club are DECA Sponsor Connie Davis, Craig Collins of the Career Tech Education Leadership Council, and DHS Principal Chris Tangle.

The Demopolis High School DECA Club recently put “their story” on video for a statewide contest and brought home the grand prize of $500.
The Alabama Career and Technical Education Leadership Council sponsored a video contest for students across Alabama, challenging students to “Tell Your Story.”
In participating, the DHS club’s video features current members as well as former members about the role DECA has played in their lives and how it helped prepare them for a brighter future.
“We wanted to participate in the contest because of the $500 prize, but even more importantly we wanted to get our story of DECA out there and tell about the impact it has and how we will carry it with us the rest of our lives. DECA has helped so many students, many who are now successful adults,” said senior DECA member Mary Michael Bradley.
One of the keys in developing the prize-winning video was the inclusion of those who have already graduated and leading successful careers.
“We wanted to include all DECA students and alumni. We found alumni at the University of West Alabama, Shelton State, and here in Demopolis and asked them how DECA helped them. We found that DECA has opened the doors to many career opportunities. My sister and I both spoke about how DECA helped build our confidence,” said Sarah Margaret Veres.
“Making the video was quite a process, but it meant a lot. We felt like we were part of something big,” said Jonathan Helms.
On Wednesday, Nov. 2, Craig Collins, an education administrator for the Alabama Department of Education and a Career Tech Student Coordinator presented the $500 prize to the DECA Club and DECA Sponsor Connie Davis.
“They did a fabulous job telling us their story and the story of former students,” Collins said. “The showed how DECA helped prepare them for a career and how it is benefiting them in the workplace.”
Collins went on to say how important programs like DECA are in today’s education system.
“We believe DECA and similar programs are a great way of providing students the essential skills they will need to enter the workforce. It benefits those who are entering college or those who seek to develop skills to enter the workforce.
“We are delighted these organizations are supported by the superintendent and career tech education coordinator (Davis). They provide outstanding leadership to these students and are developing the future leaders of our state,” Collins added.
While the prize of $500 was exciting and proof of a job well done, the students involved said the video project grew into something much bigger.
“It’s more to us than just a video,” Bradley said. “It’s who we are.”

Test drive event could raise up to $10,000 for Demopolis schools

Windham Motors in Demopolis is offering a unique way for people to help local schools while taking a test drive... read more