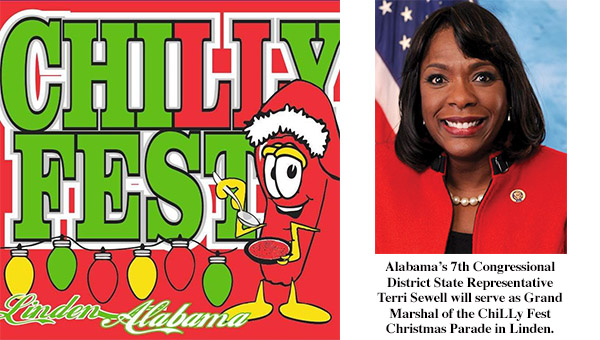 Linden’s annual ChiLLy Festival begins Friday night with a free concert and continues with a variety of events on Saturday.

The annual ChiLLy Festival is just days away as volunteers are working to put the final touches on the event that begins in downtown Linden on Friday, Dec. 9, continuing through Saturday.
Among the highlights of the festival is the annual Christmas Parade and officials have announced that State Rep. Terri Sewell will be recognized as this year’s Grand Marshal.
There will be a variety of special events and entertainment throughout the two-day event, including a performance by Farmer’s Daughter in a free concert at the Chili Cookers Party starting at 8 p.m. on Friday night.
Saturday’s events will include the chili cook-off, vendors, the ChiLLy Chili Fun Run, the ChiLLy Fest Cruise-In Car Show will be held from 9 a.m. to 3 p.m. at the courthouse parking lot, the annual Christmas Parade, and a fireworks extravaganza. A public serving from the chili cook-off participants will be held at noon. The judging for the chili cook-off as well as a cornbread cook-off will be held at 11 a.m.
A Christmas carnival will be held both Friday and Saturday.
For those entering the Christmas Parade of Lights, there will be prizes. The best float will win $100. The theme for this year’s Christmas parade is “Country Christmas.” There is no fee to enter the parade.
Those interested in participating in ChiLLy Fest or would like to help by sponsoring should call Bruce Ward at 334-295-5051, ext. 1. All forms and the list of events can be found under ChiLLy Fest at lindenalabama.net. ChiLLy Fest news can also be seen on Facebook at www.facebook.com/ChiLLyFest36748.