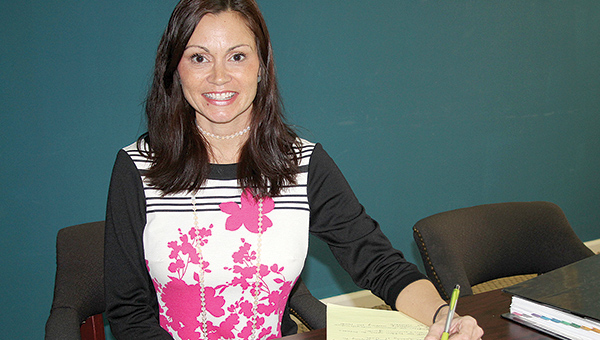 Candace Dorriety is the new executive director of the Demopolis Area Chamber of Commerce.

Candace Dorriety has been named the executive director of the Demopolis Area Chamber of Commerce, beginning her duties in the role last week.
Dorriety is a native of Atmore, Alabama and has lived in Demopolis since June 2015. She is a former teacher, holding a bachelor’s degree in Language Arts from Auburn University, and has served in the business community as an executive assistant to the president and CEO of Epsilon Systems Solutions as well as working with a commercial real estate appraisal firm in South Carolina.
She was a teacher for eight years, teaching in Auburn and Ocean Springs, Mississippi.
Dorriety and her family came to Demopolis after her husband, John David Dorriety, decided to join the civilian workforce after years in the military.
Being in the military, the Dorriety family has lived in multiple locations over the years, beginning in Charleston, South Carolina followed by San Diego, California before moving overseas to Sicily, Italy and then Spain. They moved back to the U.S. in 2011, settling in Ocean Springs until 2015 when John David took a civilian position with Georgia Pacific.
The family, which includes three children, has settled into Demopolis.
“When we were looking to move to the area, we were focused on areas within 60 miles of my husband’s work. As we looked it became a no-brainer that Demopolis is where we wanted to live. It amazes me how people have welcomed us. I have said that we don’t have family in Demopolis, but we feel like we do. Demopolis is home to us now,” Dorriety said.
She said her love for living in Demopolis is one of the reasons she wanted to serve the local chamber of commerce.
“Demopolis offers so much already, but there is potential for unlimited success and I want to be a part of that. That’s why I wanted to serve in this position,” she said.
Dorriety is coming into the position with specific goals in minds.
“I want to work to uncover our hidden gems in order to increase tourism and economic growth. We have resources here that many other communities do not have. I also feel that we can capitalize more on the hunting and fishing aspect of our community,” she said.
She also said she wants to strengthen the economic infrastructure by meeting the needs of businesses and citizens.
“I want to make sure we are consistent in retaining and magnifying those things that are working in our community and work to improve those things that could be better,” Dorriety said.
The former teacher also looks to utilize her experience in education to build a stronger bridge between students and the needs of area businesses and industries.
“I want to have a strong relationship between our school and businesses to help our students meet the needs of the job market,” Dorriety said. “Students need to know the skills they will need and I feel we can all do a better job accomplishing that by working together.”
Dorriety is filling the position of chamber’s executive director that was vacated when former director Ashley Coplin resigned to accept a position with another company.
“I have to thank (Coplin) for working with me through the transition and I’ve enjoyed meeting members of the chamber and chamber board. The mayor (John Laney) has also visited and we had a very nice discussion,” she said.
Along with her husband, Dorriety’s family includes three children: Alexis, 14; Zachary, 12; and Finn, 3.

(This story originally appeared in the Wednesday, Jan. 4, print edition of the Demopolis Times.)