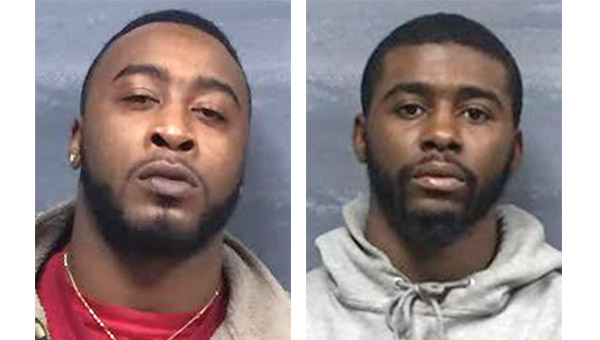 Shantrell Dremeke
Braxton, left, and Mickell DeMarcus Jowers have been arrested and charged in connection with a 2015 armed robbery at Marvin’s in Demopolis, according to the Demopolis Police Department.

The Demopolis Police Department’s Criminal Investigations Division has arrested two suspects believed to be involved in an armed robbery that occurred in September 2015.
Mickell DeMarcus Jowers, 23, and Shantrell Dremeke Braxton, 26, both of Demopolis, were arrested on Thursday, Jan. 5, and each charged with one count of first degree robbery.
According to Demopolis Police Chief Tommie Reese, the arrests stem from an incident on Sept. 19, 2015 when a man allegedly entered Marvin’s Building Supply and demanded the store’s bank deposit by gunpoint. The suspect then fled the area running toward the Crossgate Apartments complex with the undisclosed amount of cash.
“Although this has been a lengthy investigation, our criminal investigators never gave up and continued working on the case, which led to the arrests,” Reese said.
After being processed at the Demopolis Police Department, the two suspects were transported to the Marengo County Detention Center to await a bond hearing. Bond has been set at $100,000 for each of the suspects, according to Reese.
“I want to salute the Criminal Investigation Division for their hard work and dedication in bring this investigation to an end,” Reese said.