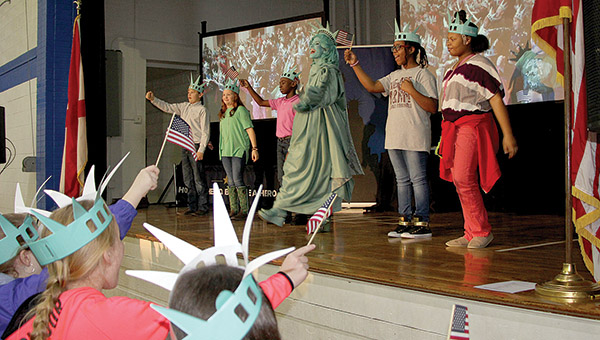 Students at U.S. Jones Elementary School join “Libby Liberty” in the singing of “YOU in the U.S.A.” to kick off this year’s Liberty Learning Foundation’s Super Citizen program. A similar event was held at Westside Elementary School where second graders will be participating in the program.

Students at U.S. Jones and Westside elementary schools will be learning about what it means to be a “Super Citizen” in the coming weeks.
The Liberty Learning Foundation kicked off its Super Citizen Program at the two schools on Tuesday. The program is designed to engage students in learning crucial lessons in civics, character, financial responsibility, career building and the “Great American Story.” The 10-week program involves students participating in Torch Teams that will nominate and vote on people within their community to honor as great Americans. Students in the second grade at WES and those in fifth grade at U.S. Jones will be participating.
The program kicked off with the annual visit of the very popular “Libby Liberty,” who introduces the program and teaches students facts about the Statue of Liberty. Libby Liberty is portrayed by former Broadway actress Kristen Sharp. To conclude the program, students will convene on April 20, where they will honor local as Super Citizens. Students read their hero nomination essays and present each “Super Citizen” recipient with a Statue of Liberty replica trophy.
“It helps them bring their learning full-circle,” said Patti Yancey, Liberty Learning Foundation president. “They learn that when you honor a hero, you become a hero.”
Demopolis City School System is just one of 17 participating in the program with the help of funding from the Alfa Foundation, the charitable arm of Alfa Insurance. The Alfa Foundation donated over $32,000 to bring the program to 47 schools in across the state.
“We couldn’t bring the program to schools, train the teachers and orchestrate these engaging events free of charge without the partnership we have with generous sponsors like Alfa,” said Yancey.
In addition to Alfa, the program is free to the school through grants and donations to the Liberty Learning Foundation by Ed Luger of the Matthews Children’s Foundation, AlaTrade Foods, ScreenTech, Valley Harrison of Trustmark Bank, Robertson Banking Company, Kiwanis Club of Demopolis, and the Rotary Club of Demopolis.
“We’re in our third year and we have expanded it to the second grade. It is catching fire and we are all proud of that,” said USJ Principal Leon Clark.
“We provide a civics education course, but it is more like an experience for the students,” said Becky Saunders, regional development director for the Liberty Learning Foundation. “Our goal is to teach, inspire, and empower the next great generation of Americans.”
The program will be incorporated into classrooms through vocabulary, discussions and other curriculum.
“This program explains how we became a country; it’s something they don’t fully understand until we go through this program. Ultimately, they realize that they have a role as a citizen to maintain what others have started,” said U.S. Jones fifth grade teacher Dana Hill.
One of the more enjoyable parts of the program for the students is recognizing those within the communities as “Super Citizens.”
“Students enjoy the process of recognizing heroes in their own family and community. The students will nominate someone they feel is a great American and they have to give examples as to why they feel that way. Each class will make nominations and then vote on just one,” Hill said.
Liberty Learning, a Huntsville-based nonprofit that teaches students about civics, character, financial literacy, careers and social studies.
Since 2010, the “Super Citizen” Program from Liberty Learning has reached over 81,000 students and honored almost 1,400 local heroes.
For more information on Liberty Learning, visit LibertyLearning.org.

(This article originally appeared in the Wednesday, Feb. 8, print edition of the Demopolis Times.)