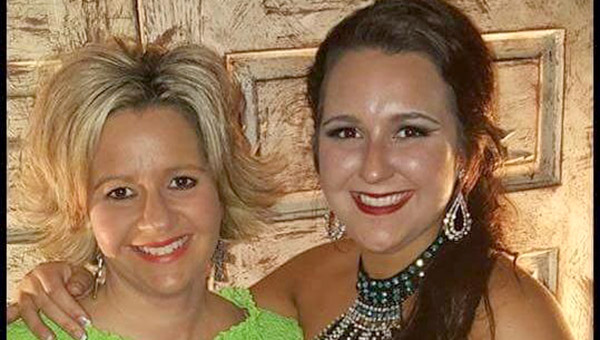 A family with local ties has been drawn into the battle of their lives after a cancer diagnosis of one of their children in 2015.
Olivia Coppedge, who recently turned 18, was diagnosed with Hodgkin’s Lymphoma and has been battling every day since. According to her mother, Nicole Skelton, it has been an up-and-down ride of highs and lows ever since.
Skelton, a Demopolis High School graduate who is employed at AirEvac in the city, said Olivia’s problems began with what they thought was a simple case of seasonal allergies.
“In March (2015) she said she had a sinus infection. I wanted her to go on to school, but she decided to go to the doctor. Then, I got a text from her saying the doctor wanted her to go to the hospital for a chest x-ray,” Skelton said.
That was the beginning of the family’s fight as Olivia was quickly diagnosed with cancer and told to go to Children’s Hospital in Birmingham. Within three days of a biopsy, it was confirmed that Olivia had Hodgkin’s Lymphoma.
After a surgery, it was determined Olivia’s cancer was at Stage 2 and she began out-patient treatment at Children’s Hospital. She had a second surgery to place a port for her chemotherapy treatments. She continued those bi-weekly treatments in Birmingham into November.
In January 2016, and the chemotherapy treatments completed, a PET scan was conducted to see how Olivia responded to those treatments. The diagnosis was a good one as it appeared Olivia was clear of cancer and in February she underwent surgery to have her port removed.
“She was so excited,” her mother said. “She got to go to her junior prom, which was a really big deal for her.”
The joy was fleeting, however, as Olivia became sick again with the same symptoms as before.
“In April we went back to the doctor and we were told her lymph nodes were swollen, but felt it was natural considering what she had been through. But, we were advised to watch it carefully,” Skelton said.
In May, the family returned to the doctor and was told they wanted to perform chest x-rays of Olivia’s chest.
“That was the point my heart sunk. I knew the cancer was back,” Skelton said.
Two days later, Olivia was back to square one with another biopsy followed by another surgeries two days later to place another port to begin chemotherapy once again. This time, the treatments would be even harder.
“She spent one week in the hospital receiving very strong chemotherapy. After two to three weeks she was back for another seven-day stay,” Skelton said.
In mid-June, her chemotherapy went back to an out-patient procedure every two weeks. Throughout, Olivia was taking daily injections of expensive medicine. She also underwent a procedure to have a stem cell harvested in the case it was needed to get increase her blood count.
Shortly after beginning her bi-weekly treatments, Olivia’s blood count “bottomed out,” her mother said. She was taken by ambulance to DCH in Tuscaloosa for a blood platelets transfusion.
In September, Olivia continued her outpatient chemotherapy and in October began a series of 20 radiation treatments, a grueling schedule of five-day treatments over the course of five weeks.
With everything they had gone through, the family was hopeful that Olivia’s cancer would be gone for good. But another PET scan last month proved otherwise. A surgery would reveal that there was still cancer in the middle of a node, meaning Olivia would need to undergo treatments once again.
“At that point, I was ready for a second opinion. I wanted peace of mind that we were doing all we could. I knew the cancer center at DCH had ties to MD Anderson (in Houston) and they helped us to get in there,” Skelton said.
The family is now in Houston for a consultation to consider the family’s options and to see if she can continue treatments in Birmingham or if she will need to stay in Texas.
For Olivia, cancer has dominated her teen-aged years.
“She was always an active student. She was in cheering, basketball and all of the other things that teenagers love to do. Cancer has taken everything away from her,” Skelton said.
Throughout the process, the family has received support from family and friends. A GoFundMe account has been set up as well as a donation account at West Alabama Bank. Friends are also in the planning stages of a gun raffle and other fundraisers. To make a donation, West Alabama Bank has branches in Marion, Livingston and Reform, or, go to GoFundMe and search “Olivia’s Medical Expense Fund.”
Currently, the family resides in Reform, Alabama where Olivia, 18, attends Pickens Academy.