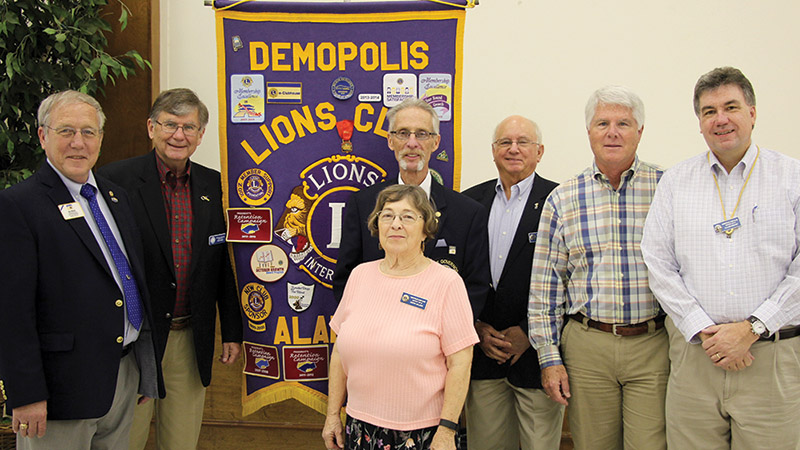 Along with guests from Lions Clubs throughout the district, the event also included the District Governor Daryl McDaniel of Dothan and Bill Phillipe of Marysville, Kansas who serves as director for Lions International.

Demopolis Lions President Frank Sampson said it was an honor for the club to host the event that provides the district’s members an opportunity to celebrate achievements and to handle annual business.

“One of the purposes of the convention is to elect the new officers for our district,” Sampson said. “We also discuss many items related to the items we support, such as Alabama Lions Sight, the UAB Callahan Eye Center, and others.”

In his role as district governor, McDaniel’s role is to carry out the message of Lions Club and support the global efforts of the organization as well as the  service projects and goals of the local clubs.

“This is a great time of fellowship and networking for our Lions members,” McDaniel said. “It is a time for us to discuss the needs of our district as well as highlighting our service projects within our own communities.”

Phillipe travels throughout the country and beyond as the organization’s international director. He noted that 2017 is a special time for Lions everywhere.

“We are celebrating our centennial, which will culminate with our Lions International Celebration in Chicago this summer. The internanational convention will bring 20,000 people together from around the world.”

He adds that the Lions organization has had much success in its 100 year history.

“We will celebrate the past 100 years, but we are also looking to the future,” Phillipe said. “Our main focus has always been on blindness and handicap, but we are also focusing our goals to fight diabetes.”

The club has taken on the fight against diabetes as it often is one a condition associated with diminished eye sight. The Lions Club also hosts the Alabama High School Leadership Forum each year at Troy University.

The day-long convention was a big success and local members enjoyed hosting fellow Lions from across the district.

“Everything went great and it was definitely a big success,” Sampson said. “The facility at First Baptist Church was perfect and we truly enjoyed the time with other Lions from communities throughout the district.”