A man who allegedly attempted to rob the Domino’s Pizza in Demopolis was thwarted by an employee who also provided key details to police that led to an arrest.

According to a press release issued by the Demopolis Police Department, J’Drian Derrell Clark, 19, of Livingston entered Domino’s on Friday, Feb. 25, carrying a rifle and demanding that the cashier give him money. The cashier told police that the would-be robber pointed the gun in their face while making his demand. 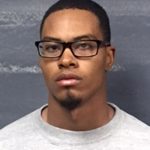 J’Drian Derrell Clark was arrested and charged with the attempted armed robbery.

“The cashier refused (to give him money) and the suspect fled in a vehicle. The cashier was able to provide officers a brief description of that vehicle as it fled the area,” the press release stated.

After an investigation by the DPD Criminal Investigations Divisions, officials said the case was closed when Clark was arrested on March 3. He is facing charges of first degree robbery.

Demopolis Police Chief Tommie Reese said the arrest was possible through the cooperation of multiple departments.

“I appreciate the efforts of our DPD investigators for a job well done. We also thank the Livingston Police Department and Chief Roger Tolliver, as well as the Sumter County Sheriff’s Department  and Sheriff Brian Harris, who assisted in this investigation that led to the arrest,” Reese said.

Clark was processed at the Dempolis Police Department and later transported to the Marengo County Detention Center for a bond hearing.