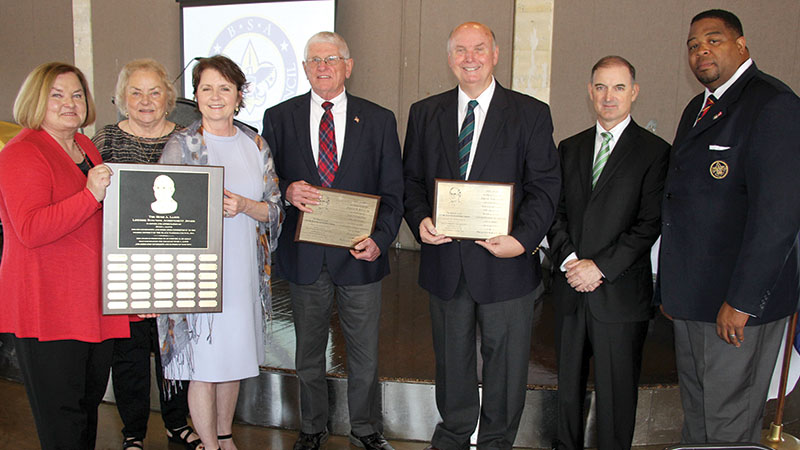 The Boy Scouts of America’s Prairie District hosted a special luncheon event Thursday to recognize those who support scouting. The district also recognized two longtime supporters who were presented with the inaugural Hugh A. Lloyd Lifetime Scouting Achievement Award.

Tom Boggs and John Northcutt were the initial recipients of the Lloyd Award, which was presented by Allen Bishop with the three daughters of Hugh Lloyd in attendance.

The keynote speaker at the luncheon was Brett Gilliland, head football coach at the University of West Alabama, who said those things taught through scouting are the same things he looks for in recruiting players.

“You go down the (Boy Scout Law) list: trustworthy, loyal, helpful, friendly, courteous, kind, obedient, cheerful, thrifty, brave, clean, reverent … what I see is a great teammate. ” Gilliland said. “Through your support, you are helping boys obtain those traits on their way to becoming young men.”

District Attorney Greg Griggers served as the chairman of the inaugural event, saying that the Prairie District serves about 400 youths and that donations help the Boy Scouts with programs and to maintain camps, including White Bluff in Demopolis.

The highlight of the event was the awarding of the Lloyd Award.

“This luncheon is a landmark moment. We lost a dear friend of scouting in Hugh Lloyd and we felt the best way to honor him is through this award in his name,” Bishop said.

Boggs, a U.S. Army veteran and retired colonel with the Alabama National Guard, served as an Assistant Cub Master, Scout Master, District Camping and Activities Chairman, District Advancement Chairman, was a member of the training committee, and served as District Commissioner.

Northcutt, a longtime banker in Demopolis, has served as a board member for the Black Warrior Council of the Boy Scouts of America and was a recipient of the council’s Silver Beaver Award in 1989.

The Lloyd Award is presented to  “an individual or group that exemplifies the ideals of Hugh A. Lloyd and dedicated generosity and support of scouting.” The daughters of Hugh Lloyd said they were honored to have their father’s name associated with the award.

“This is a great honor for our family,” said Sally Lloyd-Proctor. “It is very nice to know that other people share our high opinion of our father.”

The Prairie District in comprised of scouts in Marengo, Hale, Greene and Sumter counties.

(This article originally appeared in the March 11, 2017 print edition of the Demopolis Times.)