Mary Ellen Amanda Dupree was born October 18, 1944 to Charles Allen Dupree and Ellen Amanda Morris at the Virginian Hospital in Suffolk, Nansemond, Virginia.  She was married to James Milton Snyder on July 17, 1971 at the High Street Methodist Church in Franklin, Virginia.  She died on Wednesday March 15, 2017 at Rex Hospital in Raleigh, North Carolina. 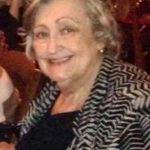 She was a loving and accomplished wife, mother, and grandmother. She succumbed to the ravages of cancer.

Arrangements are being handled by Mitchell Funeral Home, 7209 Glenwood Ave., Raleigh, NC 27612.  A visitation is planned for Sunday, March 19, at 2 p.m., that will be followed by a memorial service at 3 p.m. lead by Rev. Phillip Barton

In Lieu of flowers donations may be made to the American Cancer Society in remembrance Mary Ellen Snyder.

(This obituary appeared in the March 18, 2017 print edition of the Demopolis Times.)