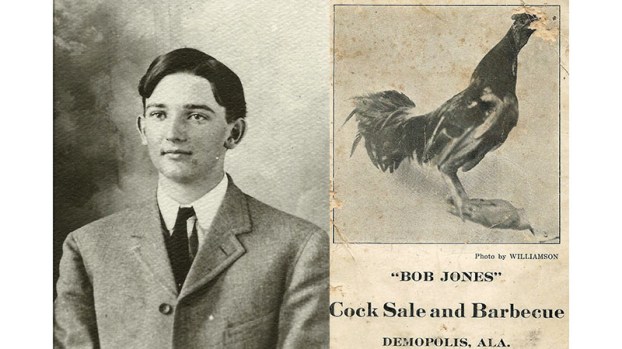 LEFT: A photograph of Clee Compton taken about the time of the auction. RIGHT: A postcard used to promote the Rooster Auction showing “Bob Jones” being held by Clee Compton.

As roosters arrived in Demopolis for the famous Rooster Auction in 1919, organizers realized they had to have someplace to put them and someone to care for them.

They thought immediately of Clee Compton.

Compton had his own roosters that he kept on his property near the Public Square, the site of the two-day auction. In fact it was his rooster “Bob Jones” that became the symbol, not only for the auction, but for the celebration of the event almost 100 years later.

The second annual Rooster Day will be held in Demopolis April 8. Sponsored by the Marengo County Historical Society (MCHS), Rooster Day will start off with a 5K run, offer booths featuring the works of artists and craftsmen, provide entertainment and demonstrations on the event stage and feature a section for children’s games and activities.

The day will continue into the evening with a silent and live auction at Lyon Hall, one of the historic homes maintained by the MCHS. 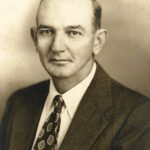 Funds raised at Rooster Day will be used for the upkeep of the group’s two historic homes and for its other activities during the year.

The Rooster Auction, the brainchild of Frank I. Derby of Sumter County, was held to raise money to build a bridge across the Tombigbee River. The lack of a bridge was the only thing holding up a cross-country highway between Savannah and San Diego, what is now U.S. Highway 80.

Compton’s own roosters took part in cock-fighting, which was then both popular and legal, said his daughter, Putt Perry. An abandoned cock pit, what Perry calls a chicken house, still sits on the Compton Family property.

Perry relishes her father’s stories of the auction, “the biggest thing that ever happened around Demopolis,” he told her. “It was one thing the whole city could enjoy.”

The same can be said of the modern event commemorating the auction.

At the time of the auction, Perry said, her father was a popular 35-year-old bachelor in town. He didn’t marry for another seven years. His wife, Margarete Pritchett, was 22 years his junior. Perry was the youngest of their children and named for her mother. An uncle gave her the nickname.

As Perry recalls, her dad said he didn’t have a lot of time to attend the auction. He was busy feeding and watering the eight or 10 roosters. Since they were sold more than once at the fund-raiser, he had to tote them back and forth from his home to the site of the auction.

His own Bob Jones, the rooster officially donated by President Woodrow Wilson, was chosen because of its brilliant black and red plumage, said Perry. The postcards and buttons advertising the auction were printed in black and white, but Compton said the full color photo was used on banners and other displays.

It is Compton’s hand holding Bob Jones in the photo on the postcard taken by Demopolis photographer Sixty Williamson.

Compton also was one of the small army of men who prepared what at that time was the largest barbecue in Alabama, Perry continued. Although he exaggerated, he told his daughter the barbecue pit was “a quarter mile long.”

The men dug the pit, lined the sides of it with coals, places rods and chicken wire across it and laid whole hogs on top. It took all night and half the next day to barbecue the meat. The men constantly basted the hogs with a mixture of salt, pepper and vinegar and fed the coals.

Another group prepared the gallons of barbecue sauce to serve with the meat.

Thousands of people flooded into the city for the auction. Most came by boat and by train since the roads at that time weren’t kind to cars. Even the state legislature moved to Demopolis for the event.

All those people had to sleep somewhere, and the city had only one hotel. Compton told his daughter that many residents took people into their homes, and other visitors slept on sofas or in their cars.

For more information on events or how to participate in Rooster Day activities, visit roosterdaydemopolis.com.

The Boy Scouts of America’s Prairie District hosted a special luncheon event Thursday to recognize those who support scouting. The... read more