Foscue volunteers give guests something to see 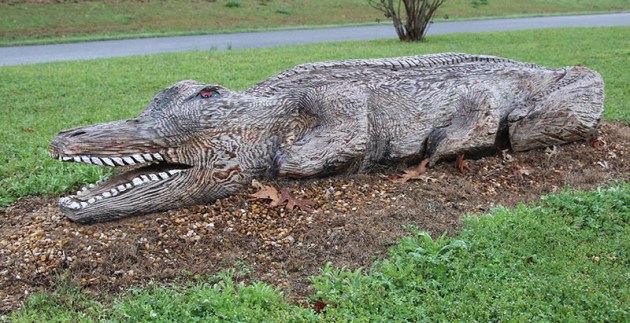 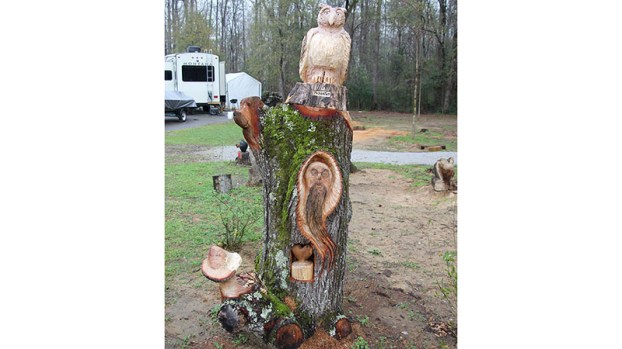 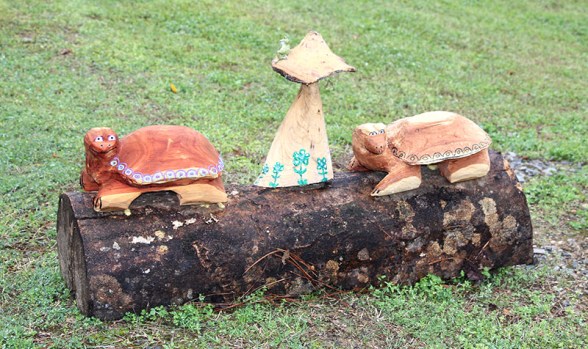 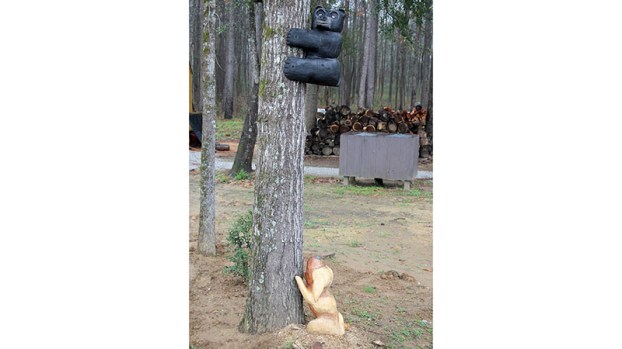 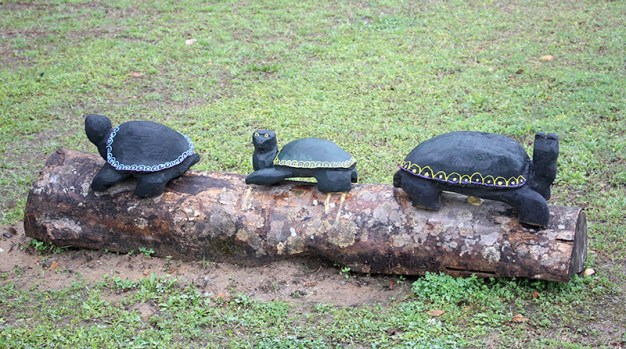 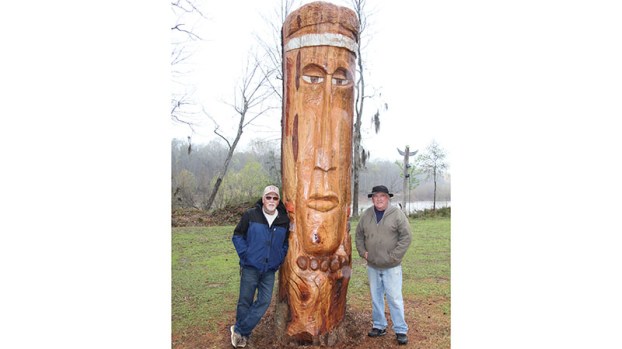 Foscue Park Host Volunteers Ed Davison, left, and Harrison Channell, right, worked together to create an 11-feet tall totem pole carved from the trunk of a tree along the entrance to the spillway recreational area.

Thanks to the efforts of two Foscue Park volunteers, there is now even more to see and enjoy at the Demopolis recreational area, including an 11-feet tall totem pole carved from the trunk of a dying tree.

Ed Davison and Harrison Channell have worked together to create the carved totem pole at the spillway area. Ben Sherrod of the Corps of Engineers said the carving came about after seeing some of Davison’s other carvings as well as a dose of inspiration from Jim Bird’s well-known hay bale folk art located north of Demopolis.

“(Davison) had carved smaller figurines and he did a large bench. Everybody loves them. I spoke with Jim Bird and got the idea for the totem pole from seeing just how large his hay bale pieces actually are. We had a tree rotting and wanted to convert it into something. I asked Ed if he wanted to take on something big and he was up for the challenge,” Sherrod said.

Davison, of Moulton, Iowa, and Channell, of Port Clinton, Ohio, are both Park Host Volunteers at Foscue. The Corps of Engineers program allows campers to stay on-site in exchange for providing volunteer labor on the property.

The two men began the project in February after Sherrod provided a printed photo of a totem pole. From there, they made a grid of the photo to help with measurements and began debarking and cleaning the tree.

“Once we got the roughage off we sanded it down until it was a smooth service. We used magic markers and graphite pencils to help us with the cuts. I was standing on the ladder and (Channell) would stand back and tell me where to cut. There was a lot of sanding and chiseling,” Davison said.

Art is something Davison knows a thing or two about. He holds a degree in art history and has always enjoyed painting and sculpting.

“This is the first large sculpture I’ve done,” he said.

While the project didn’t take the two men very long — they project about a total of one week’s of labor — it was a tedious process.

“It was a process. He would cut and then we’d stand back and look at it and then cut some more,” Channell said.

Sherrod said he is very pleased with the newest addition to Foscue Park.

“I think it turned out fantastic. It is a homage to the Native Americans who once lived here and we can’t be more tickled that they did this for us and that it is here for the public’s enjoyment,” Sherrod said.

Along with the totem pole and the bench, which provides a comfortable resting spot along the walking trail at Foscue Park, Davison’s work can also be seen in the form of an alligator at the entrance to the park as well as many smaller animal creatures at the spillway area. His creations there include turtles, owls, and even a bear cub treed by a dog. Davison has plans to include more small animals, a church and a lighthouse. “It’s an ongoing project. As I get time I will whittle and do different things,” he said.

Those pieces have gotten a lot of attention from visitors to Foscue.

“We see cars pulling over, stretching their neck to see all these things … and that’s what we want. We want people to come here to enjoy nature and see unique things,” Sherrod said.

Channell has been a Park Host Volunteer for four years and remains on-site year-round. Davison said he is more of a snowbird, coming here to avoid Iowa’s cold winters, but said he is considering a longer stay in the future.