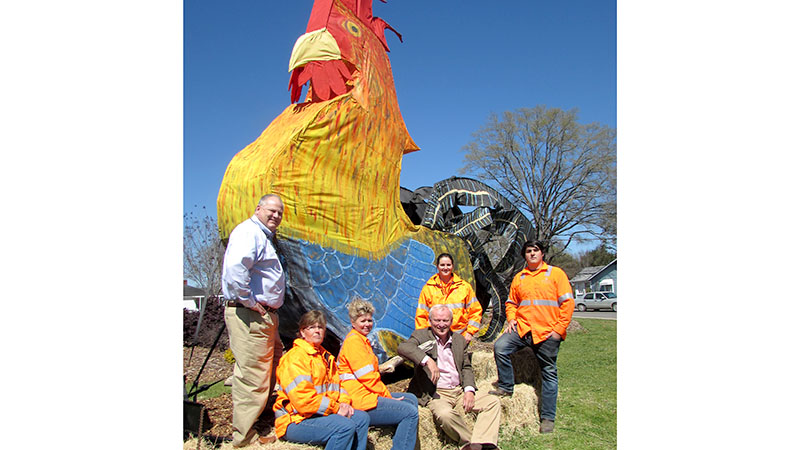 The latest addition to the Rooster Day celebration family, “Col. Bridges,” along with those who played a role in bringing the giant rooster to Demopolis. Pictured are, from left, John Scales, Sheryl Cunningham, Barbara Blevins, Woody Collins, Rachel Walker and Lane Averett. Rooster Day will be held April 8.

When the big bird appeared on the scene, he caused a lot of open-mouthed stares, a grin or two and some outright chuckles.

The 22-foot rooster quickly has become one of the most photographed sights in Demopolis, with families posing children in front of him and friends posting his picture on social media.

Located at the corner of U.S. Hwy. 80 E and South Cedar Street, the rooster is the latest symbol of Rooster Day. The second annual event celebrating the famous Rooster Auction in 1919 will be held April 8 in the Public Square.

The notion for the two-story bird began shortly after the inaugural Rooster Day in 2016. John Scales first thought of a large display, and he and Woody Collins knocked around some ideas.

At first they envisioned a lighted rooster on a metal frame, but when they consulted Barbara Blevins, director of the Demopolis Horticulture Department, “she told us what we needed to build,” said Scales.

Blevins, Collins and Scales became friends when the two men served on the Demopolis Area Chamber of Commerce board and often worked with Blevins. Whenever the Chamber needed something, she would come up with the solution. In exchange, Collins Communications provides the sound system at no charge to various city functions.

After the rooster was designed came the fun of building it.

Rachel Walker, who has worked with Blevins for about six months, said creating the bird was more “play by ear” that any structured plan.

Blevins and her crew salvaged materials to make the framework from old Christmas light pole decorations that had been damaged. The only item that had to be purchased – with Collins’ help – was threaded pipe.

The frame is covered with Dacron used to repair airplane wings. Blevins said she had some left over from decorations used during Christmas on the River. Landscape fabric forms the tail that ruffles in the wind, a project Walker did whenever she had time.

Construction took about two months with all of Blevins’ crew lending a hand during lunch breaks or after hours.

The biggest challenge was mounting the rooster on the flatbed trailer. The crew discovered that, as originally constructed, the bird was too tall to transport. It wouldn’t fit under utility lines that crossed the streets. The rooster’s feet had to be sacrificed. Even with no feet, it still took some effort to get the unwieldy fowl into place.

To keep the structure stable the legs are set over 10-foot pipes mounted on the trailer, and then it is held in place with guy wires.

From the time the rooster went up people have talked about it.

There have been a lot of good comments, said Blevins.

“I have not heard anything but complements,” added Collins.

Col. Bridges will travel to the Public Square for Rooster Day to add even more fun to the day’s activities.