The Demopolis Fire Department — along with firefighters and other first responders from across the area — said goodbye to one of their own Monday after the sudden death of Lt. Chris Foster. 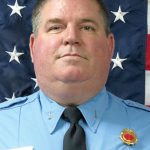 Lt. Chris Foster of the Demopolis Fire Department passed away on Thursday, March 23.

Foster was a 23-year veteran of the Demopolis Fire and Rescue Department and after starting as a part-time firefighter rose through to the rank of lieutenant.

Foster passed away on Thursday, March 23. While the cause of death could not be confirmed, DFD Chief Vernon Waters said he passed away shortly after midnight and that it will be considered a line-of-duty death, as Foster had been on two calls in the early morning hours of March 22. Waters said deaths that occur within 24 hours of a firefighter’s latest call is eligible for that distinction.

On the morning of March 22, which was Foster’s 54th birthday, he was among firefighters who responded to a two-vehicle accident with injuries as well as a medical call. Foster got off work later that morning looking forward to enjoying his birthday with family, Water said.

In addition to his duties with the DFD, Foster served as the chief of Old Springhill Volunteer Fire Department, which is where he resided with his wife, Vanya, and his children, Mary, 13; Matthew, 8; and six-month old twins, Rebekah and Sarah.

“He was a very dedicated firefighter,” Waters said.  “You could always count on him and was a mentor to many of the younger firefighters we’ve had over the years. As dedicated as he was to being a firefighter, he was even more dedicated to his family … he was a great family man.”

Honor guards from the Demopolis Police and Tuscaloosa Fire departments were present and there was a bagpipe ceremony.

During the funeral and burial, members of the Linden and Northport fire departments covered the Demopolis fire stations so that those who worked with Foster daily could attend the funeral.

“It’s a brotherhood and it speaks to the tight fraternity that we are. They wanted to be here out of respect to the Foster family and to provide our department with support,” Waters said.

At the end of the services, Foster was granted his last wish, according to Waters.

“His final wish was that his last ride be on Engine 3. That’s how he was taken from the church to the cemetery,” he said.

The loss of Lt. Foster will stay with the department for some time, Waters said, adding that members are currently focused on doing what they can for his family. On Saturday, the department held a Fill-the-Boot campaign that raised over $4,000 for the Fosters. He said anybody wishing to give to the family should contact Robertson Bank.