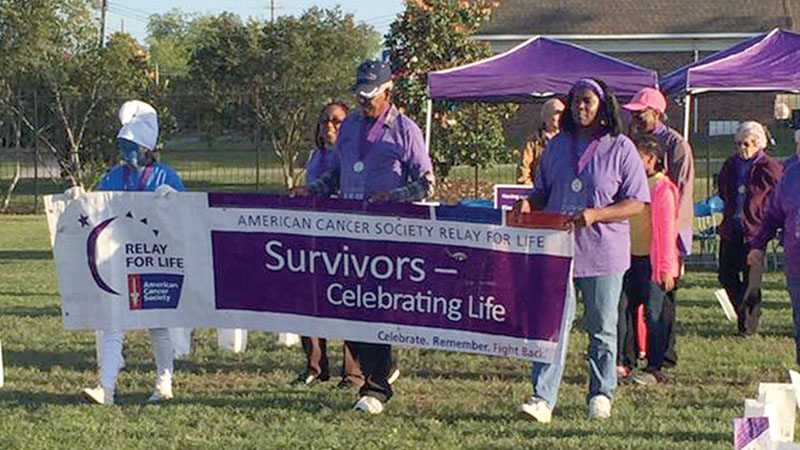 Survivors take to the walking track lined by luminaries during the 2017 Relay For Life Night held Friday at the City Landing in Demopolis. Relay Night is the culmination of the Relay for Life teams’ fundraising efforts.

With a theme of “Lights, Camera, Action, Relay!,” this year’s fundraising efforts was a big success, according to organizers. Prior to Friday’s Relay Night, there was also the annual Survivor’s Reception held earlier in April.

The official goal for this year’s fundraising efforts was $40,000. While the final amount raised has not been determined, and some donations are still being collected, those involved said they are anticipating coming close to that goal. 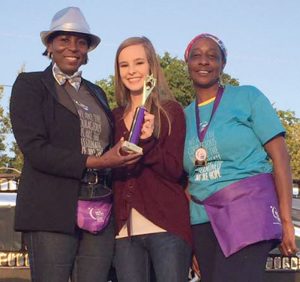 A Marengo Academy student accepts the award for the Top Fundraising Schools. MA raised almost $1,200 in the Penny War Education Challenge that involved schools from Linden and Demopolis.

“We had a great event and we sincerely appreciate the community’s efforts. The volunteers, Relay teams, and the city did a great job. We hope this year’s success will encourage even more participation next year,” said Community Chairperson Doris Stephens.

The Relay Night included an assortment of activities, including the traditional Survivor’s Lap, Caregiver’s Lap and the Team Recognition Lap. The top fundraising teams were recognized and the luminaries placed in honor of those who have fought cancer were placed along the walking track.

“The energy at the event was one of the best I’ve seen in the seven years I’ve been working in Marengo County. The support and work of this year’s teams were evident,” said Bridget Mills, the senior community manager with the American Cancer Society.

Also recognized was Marengo Academy whose students raised $1,192 through the Penny War Education Challenge held between schools in Linden and Demopolis.

Mills said she hopes the success of this year’s Relay for Life will grow and encourage others to participate.

“We want to see more people, organizations, and businesses participate from throughout Marengo County. People can participate by becoming a committee member, starting a team, or being a sponsor. Anyone can sign up to be a volunteer. Through Relay for Life, we are saving lives and making great strides toward the ultimate goal — finding a cure,” she said.

(This article originally appeared in the Wednesday, May 10, print edition of the Demopolis Times.)