Gaineswood will host a free book-signing and champagne tea on Thursday, May 18, to celebrate the book by Demopolis native Hudson Strode.  Dr. Don Noble of Alabama Public Television’s “Bookmark” will be a special guest.

Strode, who lived from 1892-1976, a Demopolis native and literary powerhouse at the University of Alabama, published his memoir “The Eleventh House” in 1975, just one year before his death. Long out-of-print, the book details Strode’s life from his happy childhood in Demopolis to the eve of World War II when Strode and his wife Theresa made a dramatic escape from the war’s outbreak in Stockholm to return to the safety of Tuscaloosa. 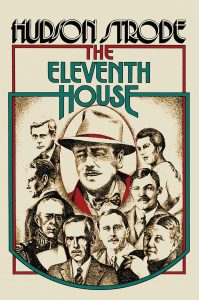 The University of Alabama Press has re-published “The Eleventh House” with an introduction by Noble, the Emmy-winning host of Alabama Public Television’s Bookmark series. The Demopolis launch of the book will be hosted by the Friends of Gaineswood on Thursday, May 18, beginning at 5:30 p.m. with champagne and iced tea in the garden. Dr. Noble will attend and talk about the influence of Demopolis on Strode in Gaineswood’s grand drawing room at 6 p.m. The event is free and open to the public. In conjunction with UA Press, copies of the book will be available for purchase and signing by Dr. Noble.

At just 16 years of age, Strode finished Demopolis High School as class salutatorian and he attended UA where he eventually became an internationally famous director of creative writing. His travels and literary credentials enabled him to meet or befriend Ernest Hemingway, Zelda and F. Scott Fitzgerald, H.G. Wells, the Prince of Wales and the King of Sweden. The Swedish king was so impressed by Strode’s book, Sweden made him an honorary knight of the country.

In “The Eleventh House,” Strode recalls Demopolis “as pleasant a small town as possible for a boy to grow up during that first decade of the twentieth century.  It had tradition and a unique history.” Gaineswood captured his imagination, and when Strode first entered its mirrored drawing room, he envisioned it “glittering with the reflections of a thousand candles.” In Gaineswood, Strode, writes, “I realized in myself a strong taste for elegance.”

(This article originally appeared in the Saturday, May 13, print edition of the Demopolis Times.)