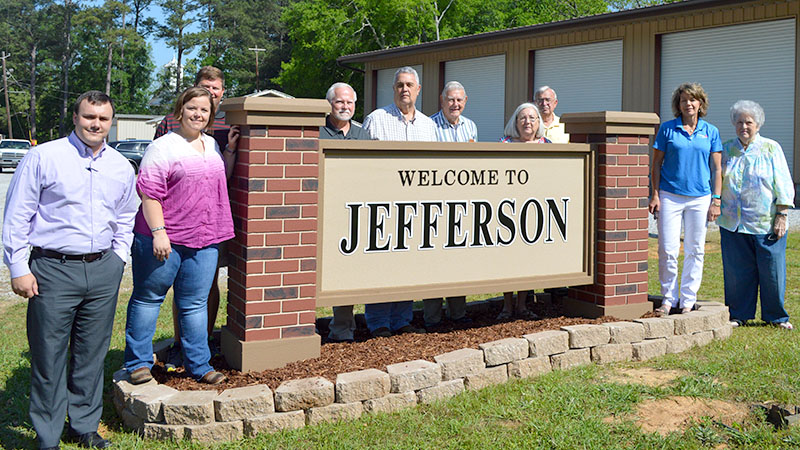 The Jefferson community of Marengo County is celebrating a new addition to downtown this spring – a brand new welcome sign.

The sign, located along Highway 28, stands outside of the Jefferson Volunteer Fire Department. It was installed in April before the annual spring barbecue at the Jefferson Community Club and already has residents excited about what the sign means to the community.

“Our new welcome sign will be a point of pride for our community for many years to come,” said Betsy Compton, Jefferson resident and member of the Jefferson Community Club. “Now, when people pass through Jefferson, they know it! It’s a milestone for us in several ways.”

For the community of Jefferson, the last few years haven’t been easy but residents are hopeful this will change with the new sign. According to Compton, the loss of its U.S. Post Office and ZIP code in the spring of 2013 was especially hard for Jefferson residents.

“That felt like losing part of our identity, especially on the state and national level,” said Compton. “In a world where we connect to the outside using our ZIP code now for weather, news, and technology as much or more than mail delivery, our ZIP code was deleted, almost as if we never existed. That’s about as close as you can get to falling off the map.”

Compton has already noticed residents and visitors taking photos next to the sign. While the sign is an entry way to Jefferson, Compton said it also serves as a good reminder to the community as a whole.

“We’re about family, friendships, tradition, community service, and we have deep roots,” said Compton. “Having this sign in the middle of our community welcomes people who pass through, it offers a photo op for people who’ve moved out of state but still have a piece of their hearts here, and it simply reminds us “who we are” and why we do what we do as a community.”

The sign was made possible by the Alabama Power Foundation Gateway grant program and is supported by the Jefferson Volunteer Fire Department and the Marengo County Economic Development Authority.

“The Gateway program allows us to support and recognize communities across Alabama by promoting community spirit and tourism,” said Diane Brooker, Alabama Power manager for Marengo County. “We are thrilled to provide Jefferson with this grant to build such an important addition to this community.”

(This article originally appeared in the Saturday, May 13, print edition of the Demopolis Times.)