‘So Far From Home’ author to speak at Demopolis Library

The Demopolis Public Library will present Lunch & Learn with Dr. Robert B. Kane, author of “So Far From Home: Royal Air Force and Free French Air Force Flight Training at Maxwell and Gunter Fields during World War II” on Tuesday, June 6 at Noon. The US Air Force History and Museums Program Office selected So Far from Home for its prestigious Robert F. Futrell Award, which annually recognizes the best book-length publication by an Air Force historian, for 2016. 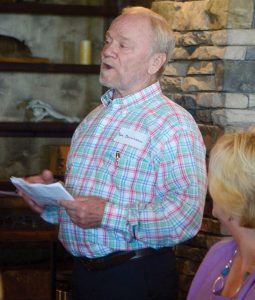 Ken Barrineau, HMCC chairman, speaks to the group about why the chamber was formed.

During World War II, the US Army Air Forces (AAF) trained over 21,000 aircrew members from 29 Allied countries. The two largest programs, 79 percent of those trained, were for Britain and France. The Royal Air Force (RAF), fully engaged against the German Air Force by December 1940, was not able to train new aircrews. The British government asked the United States to train new pilots until it could get its own flight training program underway. Lieutenant General Henry “Hap” Arnold, chief of the Army Air Corps, authorized the training of RAF pilots at select airfields in the southeast United States, including at Maxwell and Gunter fields near Montgomery.

Between June 1941 and February 1943, when the RAF terminated what became known as the Arnold Plan, 4,300 of more than 7,800 RAF cadets sent to the United States completed the three-phase AAF flight training program. Within three months, some of the same schools, including the phase 2 school at Gunter Field, began training Free French Air Force flight cadets. By November 1945, when the US government terminated the French training program, 2,100 French flight cadets out of the 4,100 who came to the United States had received their wings. This book tells for the first time the story of the RAF and Free French flight training programs in central Alabama, covering the origins, the issues, and the problems that occurred during the training programs, and the results and lessons learned.

Dr. Kane holds bachelor, master’s, and doctorate degrees in European history. He spent 27 years in the Air Force between 1976 and 2003, retiring as a lieutenant colonel. An Air Force historian since July 2005, he presently serves as the Chief Historian, Air University, Maxwell AFB, AL. He has also served as adjunct faculty for various colleges and universities and presently teaches part time for Troy University, AL, and the American Military University, WVA. He has received numerous Air Force awards and recognition as an Outstanding Young American (1985) and in Who’s Who in America.

(This article originally appeared in the Wednesday, May 31, print edition of the Demopolis Times.)