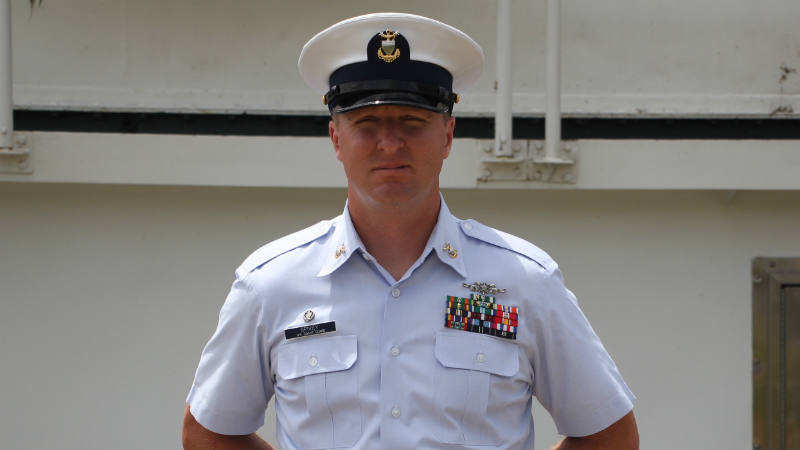 Derek Spivey was honored with a ceremony at the USCGC WEDGE to celebrate his promotion to Master Chief.

June 5 was a very special day aboard the WEDGE as Derek Spivey was promoted to Master Chief Petty Officer in the U.S. Coast Guard. As of May 2017, Spivey has served for eighteen years with the Coast Guard and is the officer in charge of the Coast Guard Cutter Wedge.

The promotion is indeed something to proud of as Spivey has put in years of effort and sacrifice to get to where he is today. His promotion was not a spur of the moment thing or the result of any one deed, but rather years of dedication and hard work. The path to the rank of Master Chief Petty Officer begins after boot camp when new members start to learn how to do their jobs.

Once the rank of E7 has been reached, members go before a panel at the sector level and the district level before receiving certification. If they have proven that they are reliable and demonstrate the Guard’s core values (Honor, Respect, and Devotion to Duty) in everything they do, they may be chosen to move up in rank.

“It’s a lot of time and a lot of effort, but there is support along the way. There are a lot of people who teach you, and you learn from their leadership.” Spivey said. “It helps prepare you for it. Everything we do in the Coast Guard is teamwork, and even though I’m in charge of this unit, this unit would not operate by me alone.”

When asked if he was honored to receive the promotion, Spivey had this to say. “I am absolutely honored. There’s a thing of our core values where you have honor, respect, and devotion to duty. Those are the basics of being a Coast Guardsman. If you don’t have those values, you’ll never reach E9. So to wear these anchors and stars, I am absolutely honored. The biggest thing for me is doing right by the American people.”

With his promotion to Master Chief Petty Officer, Spivey will be transferring away from the Demopolis area next summer. He hopes to go to another river tinder which involves marking buoys on rivers, but the needs of the service will ultimately decide where he goes and what work he will do.