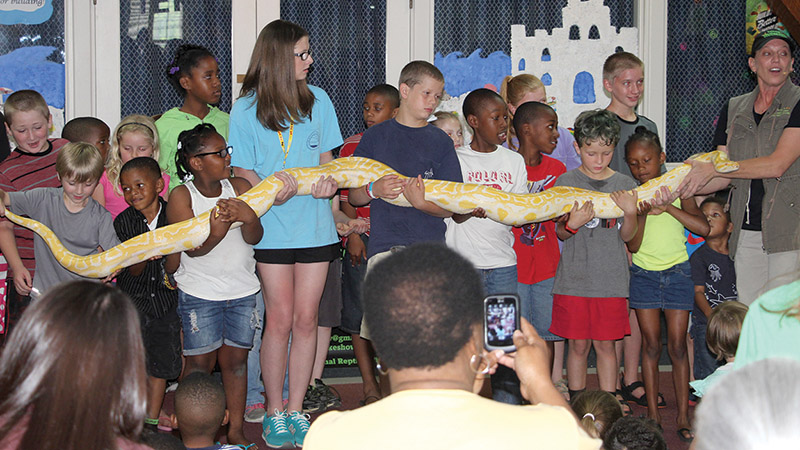 Children help Lori Feazell hold up a Burmese python during the Demopolis Public Library’s annual summer reptile program, which is featured as part of the summer reading program.

The summer activities continued at the Demopolis Public Library on June 12. Keeping in line with its goal of educating kids outside of school, the library held its annual Reptile Program as one of the many events for the local youth. The event was presented by Yarbrough’s Educational Reptiles.

The Reptile Program, also referred to as the Snake Show, brought in many different kinds of snakes from the harmless king snake to a large ball python. Along with the snakes, handlers Rebecca Tucker and Lori Feazell showed off lizards, turtles and tortoises and an American alligator.

They shared fun and safety facts about the animals and what children (and adults) should do if they come across one of these animals, particularly the snakes. The distinctive features of each snake was pointed out to aid in identification, such as the red, black, and yellow bands of King snakes and coral snakes. Tucker also stressed that even though some venomous snakes are small, they are still dangerous.

“Just because a snake is small, doesn’t mean it’s not dangerous,” Tucker said. “Treat all snakes like a venomous snake and leave it where you find it.”

The program was not just about safety; however, it was fun and highly entertaining as well. Rebecca and Lori brought in several reptiles from a collection of over 200.

Children and parents were introduced to an African tortoise named Spike, two Bearded Dragons named Flap and Jack, and an American alligator named Sweet Pea. At the end of the program, the kids were allowed to hold Banana Pudding, a 12-foot long python.

Tucker loves seeing how children interact with animals they may not be familiar with. “It is a good and rewarding feeling to see them excited and getting to see some animals they’ve never seen before,” Tucker said. “We love offering hands-on opportunities for kids who don’t get to go to zoos and see these animals.”

The passion for reptiles runs deep for Tucker, who inherited the business from her father, Tom Yarbrough, the founder of the Yarbrough’s Educational Reptiles program. Tucker grew up around reptiles and has developed a unique relationship with them.

“I grew up with animals and over time that love became a passion. It’s a huge responsibility to take care of animals, but it also very rewarding. I love what I do and I love traveling to schools and libraries to share my passion with other people.”