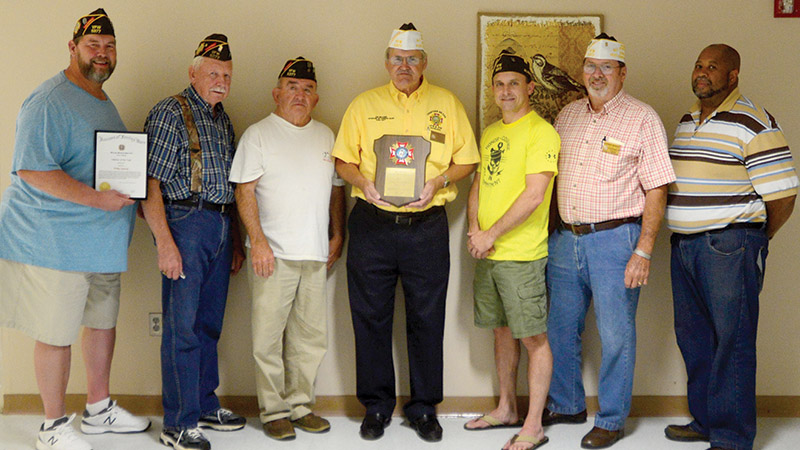 The Marengo County Veterans of Foreign Wars Post 5377 was recently awarded the distinction of being the top post in the state.

Each year during the annual convention of the State of Alabama Veterans of Foreign Wars, the Top 10 percent of all posts are awarded All State Team status. This award is earned by each post by first achieving more than 100 percent of its membership goal and by completing a number of community projects.

The members Post 5377 not only achieved the goals, but exceeded them, according to Post Commander Lee Belcher. Not only was the post honored with All State Team status during a convention, but it was also named the top VFW Post within the state. This marked the second consecutive year the post achieved All State Team status.

During the annual banquet at the Perimeter Hilton in Birmingham, Belcher was presented the Joe Boyles Award of Excellence for his accomplishments during the 2016-17 membership year.

“This honor is never achieved solely on the acts of the one person whose name appears on the award,” Belcher said. “It is earned by the post members who take time from their families and sometimes their professions to make sure we complete our projects.”

Belcher also said the success of the local post is made possible through the support it receives from the community.

“We could not afford to finance our projects without support from the community. The funds from our Veterans Day and Memorial Day Buddy Poppy distribution campaigns help finance the needs of our veterans. Our annual golf tournament helps fund other projects and the operation of the post. We also receive donations from businesses and individuals who want to show their appreciation to those who served our country,” he said.

Belcher added that Post 5377 will soon announce its new commander for the upcoming membership year that begins July 1.

The post welcomes current and eligible VFW and auxiliary members to attend their meetings held monthly on each second Tuesday, in the classroom at Bryan Whitfield Hospital, at 6 p.m.

(This article originally appeared in the Saturday, June 17, print edition of the Demopolis Times.)