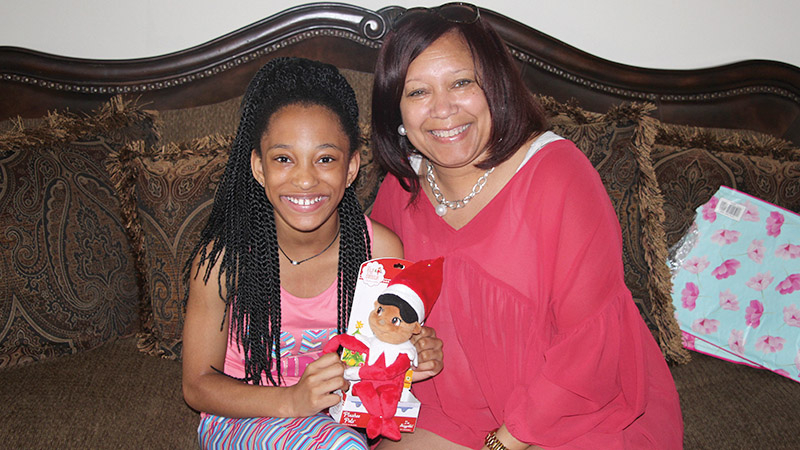 Skylar Scott with her mother, Tammi, and the early Christmas present she received courtesy of the Demopolis Post Office.

Christmas came early for a local Demopolis girl. Skylar Scott wrote a letter to Santa asking for a new Elf on the Shelf doll to go along with the one she already had. So to make her wish come true, her mother, Tammi Scott, worked with post office employees to get her daughter an early Christmas gift.

“Last Wednesday, for whatever reason, Skylar was in a Christmas mood and she decided to write Santa a letter. In the letter she asked for an Elf on the Shelf,” said Tammi Scott. “So, on Thursday I got a call from Adrienne Fancher at the post office. She told me that they had received Skylar’s letter and they wanted to honor what she was asking for in her letter.”

The post office did honor her request and a new Elf on the Shelf doll was delivered to Skylar on Wednesday, June 14. The delivery was a very welcome surprise for Skylar.

“I have been asking Santa for another Elf on the Shelf so that I could have two. A lot of my friends have like two or maybe three, so I just wanted another one,” said Skylar. “So I was really happy to get this one.”

Adrienne Fancher, a post office employee, bought the doll for Skylar after messaging her mother on Facebook. “The carrier brought in a Christmas letter in June and it was so adorable, so I went online to look. I didn’t really know what Elf on the Shelf was and I found it online and asked if it was okay to buy her one.”

Not only did receiving toy brighten Skylar’s day, but it also made Fancher feel good about being able to make someone else happy.

“It was an awesome and exciting feeling to know that I made her happy. Her smile was priceless when I saw her. Doing something nice for somebody always makes me feel good. With all the bad stuff on the news, it’s always nice to spread something good every now and then.”