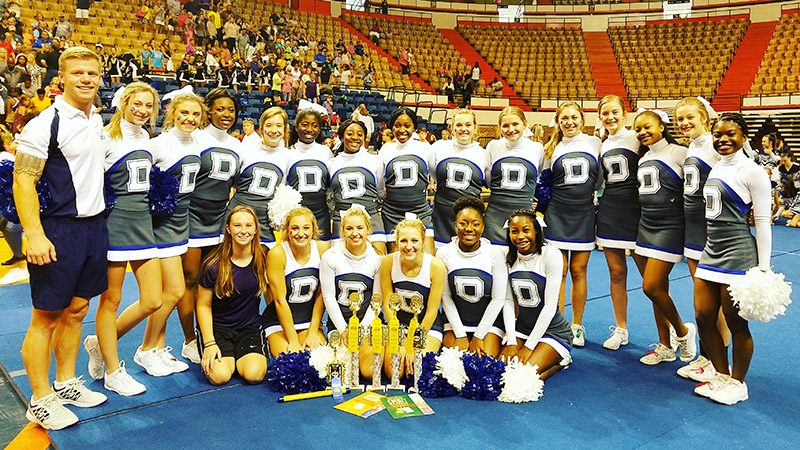 The 2017 Demopolis High School cheerleading squad made a clean sweep during Universal Cheerleaders Association cheer camp at Auburn University May 31 through June 3.

Despite competing against tough rivals like Northridge of Tuscaloosa and St. James of Montgomery, the DHS cheerleaders came in first in every category. Their success came from hours of practice and dedication.

“Our success came from practice, practice, and more practice. We have girls that play other sports like softball and track, so we had to work around other sports to get in the practice we needed,” said DHS Cheerleading Coach Jennifer Lay Jones.

In addition to taking first place, five of the squad’s members made All-American cheerleading honors and have been invited to London to cheer at the day parade.

Carter, Culpepper, and Webb were also invited by the UCA staff to try out for the 2017-18 UCA staff team.

The Tigers mascot, Julia Singleton, also received the leadership award from peers while at camp.

The rewards for the clean sweep kept coming as the whole squad was invited to cheer at the Buffalo Wild Wings Citrus Bowl at Disney World Dec. 29, 2017 through Jan. 2, 2018. Culpepper and Webb, the team captains, were chosen to cheer at The Varsity Spirit Spectacular pre-parade in Disney World Nov. 29 through Dec. 3.

This past week, Lay said the squad received another invitation; one to cheer during halftime of the NFL’s Tennessee Titans and Carolina Panthers game.

With the invitations to travel for performances, the cheerleading squad will be holding fundraisers to help pay for the trips.

Jones said she hopes that the bond the group formed at camp taught them to be respectful of each other and to be appreciative of the things they have. “That was our main goal this year and I hope that is what they took from camp and that it will carry over into the school year.”

(This article originally appeared in the Saturday, June 24, print edition of the Demopolis Times.)