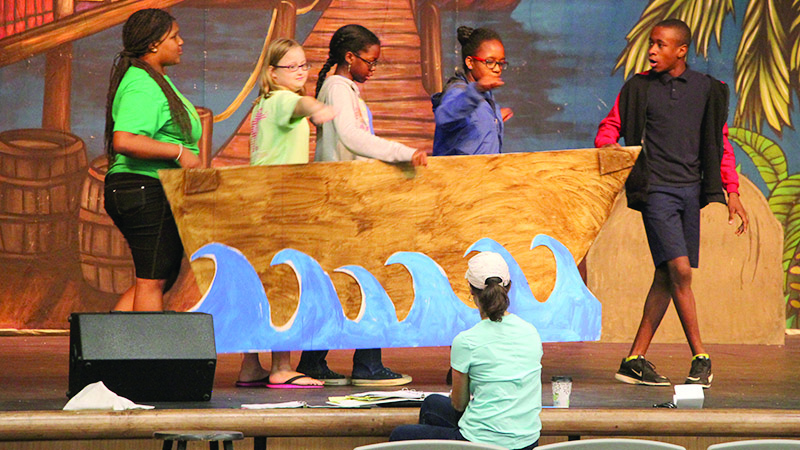 Summer enrichment camps continue at Demopolis High School as students from Westside Elementary, U.S. Jones Elementary, and Demopolis Middle School prepare to take the stage for a special production on Friday, June 30, 5 p.m., after having attended this week’s theater camp. Forty-five children will take part in the production.

This year’s group will perform in “The Magic Tree House: Pirates Past Noon” and Friday’s production marks the end of the weeklong theater camp. “The Magic Tree House” is a children’s book series written by Mary Pope Osborne and it was chosen due to the series’ popularity.

“’The Magic Tree House’ series is very popular, so we thought the kids would learn a lot from that,” said Jody Tartt, who is directing this summer’s production.

Tartt said she has enjoyed the weeklong event and is pleased with the progress the kids have made in such a short amount of time.

“I’ve never directed a play in only a week before, but I am thrilled that I’m able to do it,” said Tartt. “It was really less than a week, more like four days. So the kids have literally had to learn all of their lines and all of their music in a very short amount of time. But, they’ve responded to it very well.”

The theater camp has gone on for several years through the Missoula Children’s Theater, a traveling company, but this is the first year it has been done with the employees of the Demopolis school system.

Tartt said she hopes the kids will learn that it takes all sorts of people to make a play happen. Many teachers and students have come together to help make the play a success, and without them there probably wouldn’t be a play at all. “It’s not just the actors. I think from this experience they get an idea of what happens behind the scenes with the sets and that it takes teamwork to put a play together. It’s a team effort.”