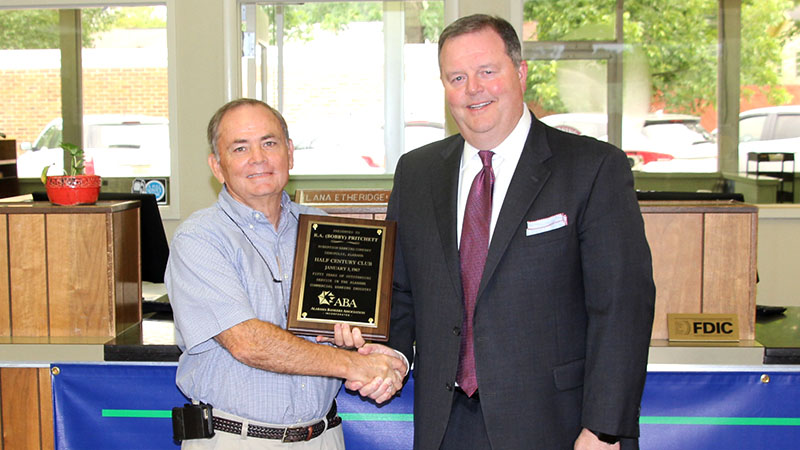 R.A. “Bobby” Pritchett, left, is presented a plaque by Scott Latham, President and CEO of the Alabama Banker’s Association, upon his entry into the Alabama Bankers Association’s Half Century Club. Pritchett began his banking career in 1967 with Planter’s Bank and Trust in Thomaston and continued with Robertson Banking Company where he currently serves as a member of the Board of Directors.

A special award was presented last week to Robertson Banking Company’s R.A. “Bobby” Pritchett who in 2017 is celebrating 50 years in the banking industry.

To mark the milestone, Robertson Bank hosted a reception at the Thomaston branch where the Alabama Bankers Association presented Pritchett with a plaque welcoming him to the organization’s “Half Century Club.”

Pritchett comes from a family of bankers. His grandfather co-founded Planters Bank and Trust in 1914; his wife, Peggy, retired after 42 years in banking; and today his son, Lee Pritchett, is a senior vice-president at Robertson Banking Company.

(This article original appeared in the Wednesday, July 5, print edition of the Demopolis Times.)